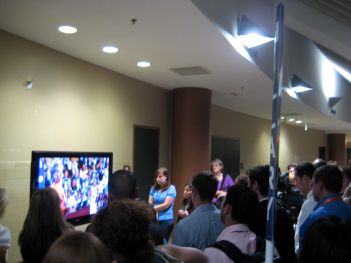 Tuesday was Hillary Clinton Day at the Democratic National Convention in Denver. The senator and former presidential candidate gave a rousing speech that most pundits agreed accomplished what she had promised to do: leave no doubt that she is fully behind the candidacy of her former rival, Sen. Barack Obama.

Before the speech, all any journalist trolling for stories inside the Pepsi Center wanted to do was figure out any sort of fresh angle on Clinton they could manage, and all any delegate or guest wanted to do was to get inside for a prime viewing spot before she began. Which brings me to my first lesson of Day 2 of the DNC:

Be Careful When You Go to the Bathroom: Being a member of the State Blogger Corps, I have a seat reserved for me on the floor in the District of Columbia's section inside the Pepsi Center. But after taking a quick break outside to grab a soda and use the bathroom about 30 minutes before Clinton's speech was set to begin, I was denied entry to the floor upon my return. The Secret Service had shut down every access door to the delegate seats, apparently because the DNCC had issued far more floor passes than the Pepsi Center could actually handle. One sympathetic door staff employee told me she was sorry, but that the Secret Service and the fire marshal had just chewed her out for letting someone else inside before me. She wasn't supposed to let anyone else in, "no matter who they are."

I wasn't the only one who got stuck in the arena's concourse. Hundreds of frustrated pass holders sprinted from door to door, only to find the same situation at each one. By the time it was clear no one was getting inside, those left out began gathering around the many TV monitors in the hall to pay attention to the speech. There were so many people stuck outside that it was difficult even to get a clear view of the screens.

A couple more lessons after the jump.

Bring Band-Aids: The current number of blisters on my feet from hoofing it all over downtown Denver and the long march daily into the Pepsi Center: Five. The number of times I have wished I could get away with wearing sneakers everyday: Countless.

Look on the Bright Side: The inability to eat anywhere close to three meals a day (Tuesday I had one meal, lunch, and so far on Wednesday approaching 3 p.m. I've subsisted on two bites of bacon and a plate of cheese cubes) could actually just be a brilliant Democratic Party-sponsored weight loss program. Obesity! Diabetes! These are serious issues facing Americans, but at least everyone will leave the DNC looking trim.

Don't Leave Anything Behind: This lesson is directly related to Be Careful When You Go to the Bathroom: because I've been allocated internet access on the floor, my computer power cord was still plugged in next to my seat when I got locked out. As soon as the convention activity is done for the day, all doors become "exit only," meaning my cord was locked inside the Pepsi Center overnight. I ran out of juice at about 9:30 a.m. this morning, and wasn't able to retrieve it until well after noon.