Hollywood Palladium to Reopen in October with JAY-Z 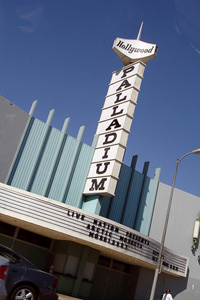 On September 23, 1940, the Hollywood Palladium opened its doors for the first time with the then not-so-well-known Frank Sinatra singing with the Tommy Dorsey Orchestra.

Then in the 60s, the venue became a television studio, also becoming the location for the Emmy, Grammy, NAACP and Country Music Award shows. But then again, the venue returned to its roots.

In 2007, the lease was given to Live Nation who say that over the past year they have been working on a "top-to-bottom renovation, bringing the iconic music venue back to its original grandeur."

"The venue is receiving a total renovation of all interior and exterior areas including a new dance floor, a new façade that emulates the building’s original architecture, expanded concessions, upgraded restrooms, improved interior lighting, as well as brand new paint and carpeting, all of which are congruent with the venue’s original look," Live Nation said in a statement. In addition to sound improvements, the stage has also been upgraded to hold large and more modern acts

JAY-Z, with a 12-piece band backing him, will perform at the grand re-opening on October 15.