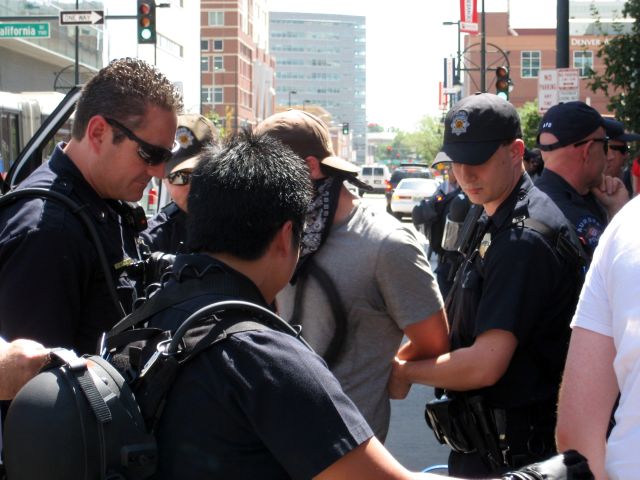 At least one protester was detained by police outside the Colorado Convention Center in downtown Denver just after noon on Monday, as the Democratic National Convention was getting underway. Four people wearing bandanas over their faces, who said they were protesting "capitalism," sat down on the sidewalk in front of the convention center, prompting a swarm of roughly 20 police officers to shut down one lane of traffic and subsequently put one of them in plastic handcuffs. Two of the other protesters told bystanders that they had not been told by police why their friend was being arrested, and claimed they had done nothing wrong.

The Colorado Convention Center is home to a large number of issue-based organizations during the DNC. Protesters are allowed to be in front of the building — many others, including abortion protesters and individuals from PETA protesting the environmental impact of eating meat, were on the same sidewalk. The Democratic National Convention is taking place a couple of miles away, at the Pepsi Center.

This post is by Sommer Mathis, Editor of LAist's sister-site DCist, who is attending the DNC as official member of the DNC's state blogger corps.