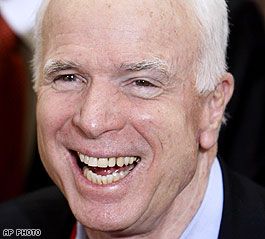 Sen. John McCain will appear in Los Angeles later today — first mucking it up with Jay Leno in Burbank then at a fundraiser in Beverly Hills — following persistent questions about his noticeable absence from the Southland.

The 5:30 p.m. fundraiser is to be held at the Beverly Hills Hilton and will be met with sign-wielding demonstrators just as the Democratic convention gets under way in Denver, according to City News Service.

The California Democratic Party plans to conduct a rally outside the hotel during the fundraiser, with participants holding signs tying McCain to President Bush and mentioning McCain's connections to oil companies, a party official said. [CNS]

This might be McCain's first public visit to L.A. since the presidential hopeful spoke to the World Affairs Council on March 26, where he "emphasized the need to collaborate with democratic allies."

Reporters noted that McCain's statement "appears to be a change in emphasis from the Republican administration of President Bush, which acted unilaterally in many foreign policy areas" failing to note that Bush and his advisors were lovers before they were fighters. In 2000, candidate Bush said in a debate that "peace in the Middle East is in our nation's interests" while then-foreign policy advisor Condoleezza Rice said "American foreign policy in a Republican administration should refocus the United States on the national interest and the pursuit of key priorities."

Let's see what reporters forget this go round as McCain hosts his $1,000 per plate fundraiser at the Beverly Hills Money Hole.

Sen. Barack Obama has twice appeared in Southern California to ask for money since securing the nomination, once at the Walt Disney Concert Hall (netting $5 million), the other in Newport Beach (about $1 million).

So far in California, Obama has raised $47.2 million while McCain has pulled in just $13.5 million, according to the most recent FEC filings.

Incidentally, the $1,000 McCain is asking for per plate at today's fundraiser will match the sum total he has so far culled from donors living inside the hotel's 90210 zip code.