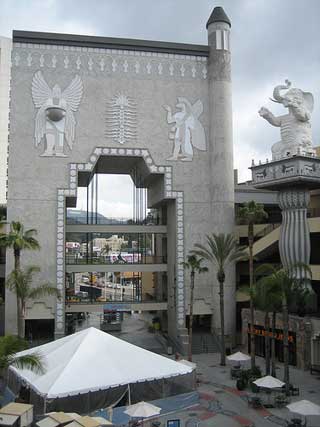 In 2007, Curbed LA named Hollywood and Highland the ugliest building in Los Angeles. From many (if not most) angles, they have a point. But In the center of this ode to modern consumerism is a secret, a reference to the glamor and debauchery that are Hollywood's past. It started, as all the best secrets do, a long, long time ago.

In 1916, D.W. Griffith made Intolerance, his response to the widely maligned Birth of a Nation (which basically resuscitated the flagging Ku Klux Klan by portraying them as heroes). At the time of its production, Intolerance was the most expensive movie ever made. Its famous Babylon set was built right on Sunset Boulevard.

The Babylonian part of the movie in particular, was felt to be racy and over the top, with thousands of scantily clad extras, scandalizing the remnants of Victorian social mores and contributing to Hollywood's growing reputation as a den of sin.

Infamy, however, wasn't enough to bring audiences back after Birth of a Nation. It bombed at the box office, causing Griffith's production company to go bankrupt.

The Babylon set was abandoned and fell into deeper and deeper disrepair. In 1919, it was declared a fire hazard and torn down. 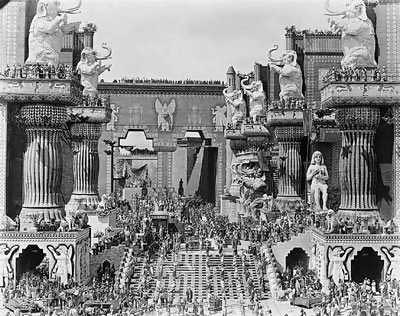 Hollywood used to be a dirty town. Like Times Square in New York it had its share of crazy homeless people, thieving junkies, punks and hookers. But just as that time passed for Times Square, so does it seem to be passing for Hollywood.

An important part of the Disneyfication of the center of what used to be the film industry is Hollywood and Highland. Definitely part of the Malling of America, this huge structure includes a hotel, a bowling alley, and mind numbing number of chain retail stores you could find anywhere. It's the home to the Kodak Theater, responsible for "moving the Oscars back to Hollywood." (If there ever was a sign of the oozing spread of mediocrity, it would have to involve the Oscars.) As an added bonus, it ruined the Chinese Theater. 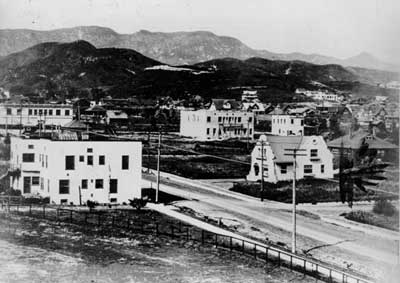 Built on the site of the Hollywood Hotel, (erected in 1905 and torn down in 1956 -- the first hotel in Hollywood and therefore home to many top stars of the budding industry) the area has a storied past. But the recognition of this fact isn't its only nod to history.

Hollywood and Highland resurrected the Babylonian arch from Intolerance (as well as a couple of the white elephant statues). And, in an effort to put icing on that cake, the arch frames a fabulous view of the Hollywood Sign (when there isn't too much smog.)

Who knew that in the center of new watered down, "safe" Hollywood there would be a remnant of such a fabulous story -- a story of excess, prejudice, dissipation and resurrection, not just of Intolerance itself, but of D.W. Griffith and the industry at large.

Quite a story. Someone should make a movie out of it.

LAistory is our series that takes us on a journey to what came before to help us understand where we are today. So far we've been to Val Verde, Thelma Todd's Roadside Cafe, a house in Beverly Hills, Echo Park's Bonnie Brae House, Marineland of the Pacific, and Grand Central Air Terminal, Wrigley Field, the moment LA got its name, the wreck of the Dominator, 1925 "Hollywood Subway." the Pink Lady of Malibu, the Lions Drag Strip, and to Disneyland (when it was cheap to get in!).