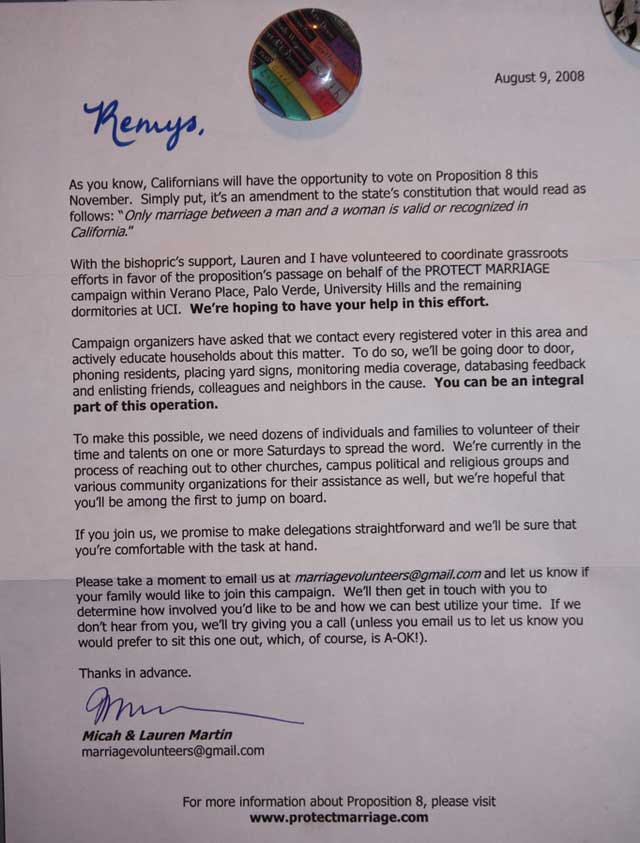 There's nothing particularly scathing in this letter asking for Prop 8 support, but as blogger John Remy at Mind on Fire points out, he was only sent this letter because he's on the Mormon Church's official ward roster.

Let me explain what’s going on here–the Mormon Church is using its considerable organizational and monetary resources to mobilize its troops to fight for Prop 8...

One of the reasons I’m making this public is because those who volunteer to this request will probably do their best to say that they’re doing this independently, as concerned citizens, rather than advertise the fact that the LDS Church is coordinating their efforts... The LDS Church’s position should be trumpeted from the rooftops; they shouldn’t escape this political battle without the deep stain of shame on its PR record. Remember, this is from the folks who brought you race-determined salvation as recently as 1978.

In another post, he explains what he hears from around Orange County:

From what my friends in Orange County wards tell me, this campaign is being reinforced every week in leadership councils as well as in Sacrament, Sunday School and Priesthood and Relief Society meetings. It sounds like similar pressure is being applied to members of Catholic and many evangelical communities as well (I’m mostly familiar with the LDS situation–if you have any information on other denominations, please let me know).