Obama's VP: A Text Message Away 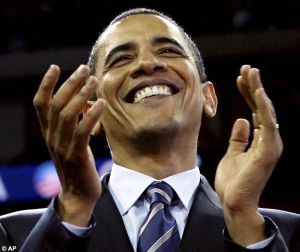 In an unprecedented move sure to keep us all (even more) glued to our cellphone and computer in the coming days, Sen. Barack Obama has promised to announce his vice-presidential candidate to supporters through a text message and/or via e-mail, his campaign announced Sunday night.

The message, sent to campaign supporters through e-mail, said anyone can receive an instant alert to know "the moment Barack makes his decision," by signing up at http://my.barackobama.com/vp or by texting VP to 62262.

But is this a groundbreaking moment for the People's presidential candidate or a shameless attempt to "harvest email addresses and phone numbers under a grassroots conceit," as Time's Mark Halperin has suggested?

Whatever the motivation, Halperin and others think the decision will come soon while oft mentioned Veep candidate Kansas Gov. Kathleen Sebelius (who nearly won our extremely scientific Veep poll in June) will discuss convention themes during a media conference call this morning.

Whether or not the two are connected remains to be seen.