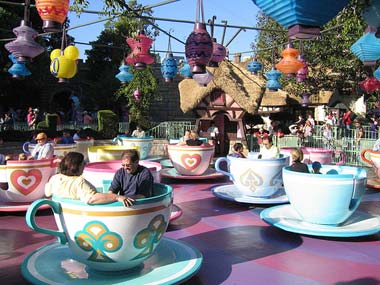 The high cost of living has hit everyone hard, and now Mickey Mouse is feeling the pain, too. That's why the price of coming to visit him and all his friends at the "Happiest Place on Earth" will be even more expensive, starting tomorrow. KNBC explains:

At Disneyland in Anaheim, one-day prices will rise from $66 to $69 for those aged 10 and older, and from $56 to $59 for children aged 3 to 9.
The price increase applies in varying degrees for longer stays, while the park hopper option, an add-on that allows ticket-holders to move among any of Disney's parks, will cost $50, up from $45.

The cost of getting yourself (and your family and friends) a key to the Magic Kingdom has risen dramatically in the past decade, and even more so in just the past few years; as recently as 2004 a one-day admission was just $49.75, almost $20 less than what it will be as of Sunday.

But most of us know Disneyland as an expensive outing (tickets, plus food, plus shopping for trinkets) or as the "Grad Nite" destination. So what's the history of ticket prices? 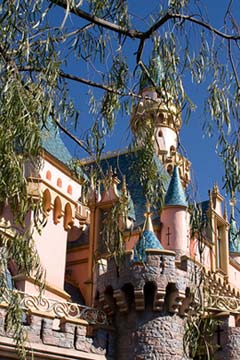 Forget what you know about "the Mouse" and the powerhouse world-wide mega corp that is Disney, and think back to the 40s and 50s, when Walt himself dreamed up the idea of having an amusement park where families could go and everyone could enjoy themselves and escape from day-to-day life. In fact, according to JustDisney.com, Disney's plans were initially to place the theme park "on 8 acres next to the Burbank studios where his employees and families could go to relax [however] World War II put those plans on hold. During the war, Walt had time to come up with new ideas, and creations for his magical park. It was soon clear that 8 acres wouldn't be enough." (Imagine that reality, Burbank-ites!) Eventually a land search led Disney to Anaheim, and the modest 8 acres grew to 160 acres.

But we're talking tickets, so, here's the lowdown--an opening day admission was $1, plus the cost of the rides. (Roy Disney, Walt's brother, bought the first one.) In addition to a modest admission price, visitors bought coupon packets to get them on the various rides and into the attractions, and they ranged from A to D, then later an E class was added. The E tickets were for the biggest and most exciting rides, which is what inspired people to begin making "E-ticket ride" a popular expression for describing and exceptional experience. In fact, the "E Ticket" has a bit of a subculture of its own--friend of LAist Mike Watt even has a song called "E Ticket Ride" and Gwen Stefani uses the term in a lyric of hers. This pricing plan was in place until 1982, when the coupons were abandoned and an overall admission was initiated (Wikipedia).

Abandoning tickets was a smart move for the Mouse, because it meant they could charge a larger amount for each park-goer, and the hassle of printing and collecting tickets was forgone. Eventually, multi-day and annual passes were created, and now there are combo-passes that get you into both Disneyland and California Adventure.

Here's what it cost to get into Disneyland over the years:

Did you search for the price for the year of your first visit--if it was after '82? (I did, it was 1988 and if an adult admission was $21.50 that means me, my mom and step-dad all got in for less than what it costs one person to get in now. Yikes.)

So if you're now shelling out $69 to get into the Happiest Place on Earth, maybe it's a good thing the City of Anaheim is spending $90,000 taxpayer dollars to teach local employees how to be nicer to visitors.

LAistory is our series that takes us on a journey to what came before to help us understand where we are today. So far we've been to Val Verde, Thelma Todd's Roadside Cafe, a house in Beverly Hills, Echo Park's Bonnie Brae House, Marineland of the Pacific, and Grand Central Air Terminal, Wrigley Field, the moment LA got its name, the wreck of the Dominator, 1925 "Hollywood Subway." the Pink Lady of Malibu, and Lions Drag Strip.