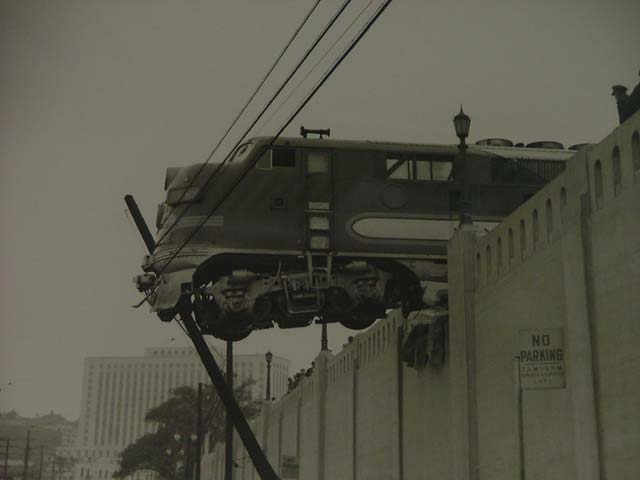 No, your eyes don't deceive you; that is a train locomotive dangling over a wall! LAist Featured Photos Pool contributor bcmacsac1 shared this vintage photo from early 1948 of this scary accident that almost took out a landmark restaurant. He explains:

The only major accident for the Super Chief was recorded on January 25,1948 when the locomotive #19L, leading the Super Chief loses braking ability while preparing to depart* Los Angeles Union Passenger Terminal Crashing through a steel bumper post and then a concrete wall located at the end of the dead end track and ultimately comes to a rest with the front half of the locomotive dangling 20 feet above the street below with no injuries to the people on board. This locomotive almost dropped in for lunch at the famous PHILIPPE'S the ORINGINAL french dip sandwich shop across the street when it was located on Aliso street. Currently located at Alameda and Ord St

According to an LA Times article from the following day, it took 5 hours and a 250-ton crane to get the locomotive back on the track and then over to the roundhouse for inspection. Fortunately, no one was hurt.

*According to the Times the train was actually done with its service, having "just brought in the streamliner El Capitan from Chicago at 8:45 a.m." and was "unhooked from the rest of the train" so "it could back onto a switch to another track en route to the roundhouse," ("End of the Line, But it Kept on Going" January 26 1948 pg 1).