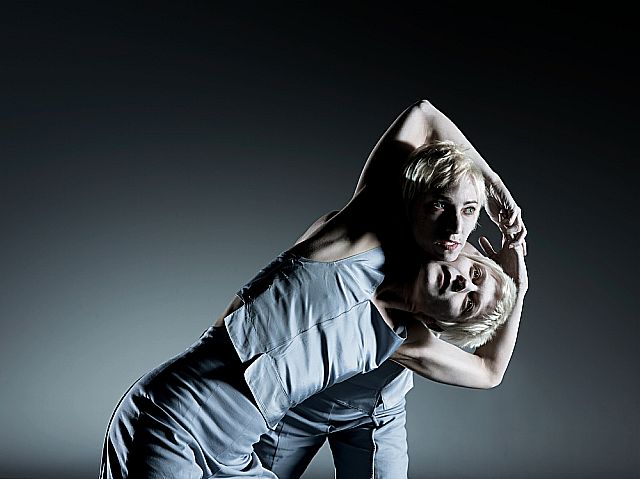 Out-of-towners blow in like a breath of fresh air when they remind you of things that we forget are possible within our daily lives. In the dance world, it's always exciting when an artist shows us what interests her or him, particularly, and how it's slightly different from what we expect or what other people find fascinating. Lean To Productions' Rachael Lincoln and Leslie Seiters did just that as they presented An Attic An Exit as part of the Dance Series at the Unknown Theater in Hollywood.

The two women, strangely similar in appearance and, more importantly, equally compelling in performance, brought their distinctive backgrounds in dance and theater to our fair city. Having danced with San Francisco landmarks like Joe Goode, Sara Shelton Mann, Jo Kreiter and Scott Wells, the two took to the stage in their own ways.

Standing with their bare backs to the audience, the two slowly dressed themselves in the men's black suit jackets that were hanging from cables above them. Once so adorned, the women raised their legs off the floor and proceeded to drift from side to side, reach for the walls and dance in the air. Gently changing directions, skimming their feel along the floor and then extending off while original music by Tyler Crosser kept a fairly steady rhythm aurally.

This scene soon dissolved into another exploration of things you might find in an attic: two suitcases became partners for each mover to perform a quiet and delicate pas de deux. Once opened, the twins discovered rope, cutlery, tea cups, saucers and other gems within these valises. Though their perspective was seemingly serious and adult, they played with each object as if they were children, trying to do odd and unexpected things with them and circumventing the conventional use.

At other times, the women played with each other, moving their heads and torsos within and around the other's arms and hands, making interesting and asymmetrical arrangements of their bodies and interloping in the positive and negative spaces of their own and their partner's shapes. Though all about movement and propelled by a very dancerly attack and sustainability, most of the action after the initial aerial scene was basically stationary and the vocabulary more idiosyncratic--appropriately restricted to the themes addressed. There were no leaps or turns but, instead, an ongoing investigation of where and how the physical body can be placed in space. Occasionally interrupting the events with an alto's high pitched exclamation, we could enjoy the phrasing and relish the wonderment.

These two women will remain in Los Angeles only through Sunday evening, so take advantage of this summer breeze.