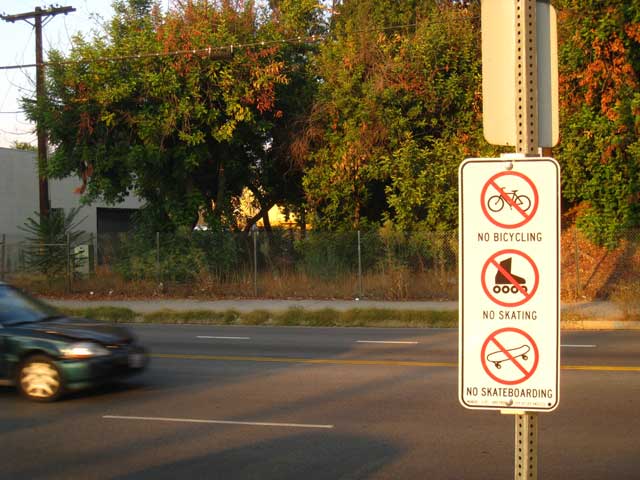 A sign near the intersection of Riverside Dr. and Fulton Ave. in Sherman Oaks. | Photo by Zach Behrens/LAist

Further investigation into reasons why a few spots around the city have signs prohibiting bicycle sidewalk riding shows that both Sherman Oaks locations were due to troubles caused by skateboarders. After pedestrians getting hit by boards, cars nearly hitting skaters falling into the street and customers being intimidated, Van Nuys Division LAPD officers requested a solution to help them enforce the location-isolated problems.

But the standard signs put up also prohibited bicycling and rollerskating on the sidewalks, which leaves us with the question of why those two modes of transportation are being denied access if they were not the problem.

So we posed the question, "can no skateboarding-only signs be installed?" Brian Gallagher, Senior Traffic Engineer for the East Valley agreed with the idea and said he would look into the possibility of signs for skateboards. "If it's possible to split it in the ordinance so it's just skateboarding, we'll do it."

That's good news! We'll let you know the update when we find out.