'It's Like the Hatfields & McCoys:' Mandeville Canyon has had Years of Problems 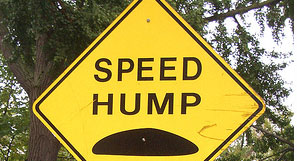 In response to the 4th of July Mandeville "road rage" incident, a former deputy for Council District 11 wrote in an e-mail to LAist that she "was not shocked when" she read the gruesome story. "When I working for CD11 on 2001 and 2002, there were problems on Mandeville Canyon with speed bumps."

The deputy continued that "the upper Mandevillians didn't want them (fearing it would slow their decent in a fire) and the lower Mandevillians wanted them due to the speeding upper Mandevillians. It got ugly to where LAPD had to lay in wait to issue tickets to the uppers, who obnoxiously honked their horns every time they went over a hump/bump."

Bob Pool of the LATimes covered the tension in 2001 writing that "one driver says he was chased down and his car rammed after he honked. Another contends that her car was kicked and pounded by two men after she honked. Others assert that they have been followed home and harassed by lower-canyon residents."

At issue is the speeding motorists and the residents attempts to slow down traffic. Lower Mandevillians were able to persuade Los Angeles traffic engineers to install asphalt bumps and the battle raged.

Robert Ringler of the West Los Angeles Community-Police Advisory Board said "It's like the Hatfields and McCoys up there."

Mandeville Canyon tensions have tested the peacemaking abilities of not just Councilman Bill Rosendahl but also Councilwoman Cindy Miscikowski and Councilman Marvin Braude. The idea of forming a task force to address the neighborhood tensions is nothing new and in fact, Rosendahl's West LA office manager Mary Misono may have some institutional memory of the journey as she has worked for the 11th District since 1959.

Another task force has just met this week. Will the community of Mandeville Canyon begin to heal or is this just another in a series over the years to come. They've outlasted at least two City Councilmembers, can Rosendahl put a stop to this?