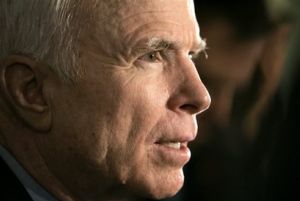 Sen. John McCain, presumptive heir to the Republican throne, is scheduled to address Latinos later today in San Diego, part of a Californian itinerary that will once again not include Los Angeles.

His campaign announced on Saturday that shortly before 1 p.m. today, McCain will address the National Council of La Raza Convention at the San Diego Convention Center, one day after Sen. Barack Obama addressed the group.

The issue still seems to be salient and the avoidance contagious; not only does McCain not have any scheduled L.A. stops — his spokesman told LAist — but his wife is also avoiding the nation's second largest city for the country's eighth.

Officials said that around the same time her husband is slated to talk to Latinos, Cindy McCain will cut the ribbon at the grand opening of the campaign's newest headquarters in Coronado, a posh, San Diego County beach community 5.6 miles from where John McCain will hold his event.

With 112 475 days until the election, has McCain already waived the white flag on a county John Kerry won by nearly 30 points en route to a California victory in 2004?

Has John McCain already given up on winning Los Angeles and, by extension, on taking (or at least being competitive) in California during the general election?

The seeming slight to Los Angeles county's three million voters certainly stands at odds with Obama's scorched earth policy of campaigning in traditionally Republican sites to cull voters of all persuasions. Yesterday, he raised millions in a Newport Beach club in a county that is as Republican as Los Angeles is Democratic.

If Obama is leaving no stone unturned, McCain seems to be turning over every stone.