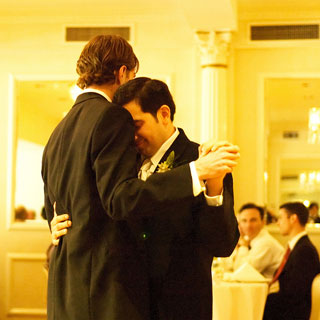 Here's one way to put the pressure on. If you donate money to the campaign to pass Proposition 8, the state measure that proposes changing the California constitution to make marriage only between a man and a woman, the No on Prop 8 people are going to make it very public. And now Hyatt may feel that in their pocket down in San Diego.

“Our goal is to create a business loss for people who contribute. We want to make it a little uncomfortable," Fred Karger, who is helping to organize the boycott and is running an organization opposed to Proposition 8, told the San Diego Union-Tribune.

The problem came up when No on Prop 8 people found that out the owner of Manchester Grand Hyatt, Doug Manchester, contributed $125,000 to Proposition 8. He told the Tribune that when "he had heard that schools that teach that marriage is between a man and a woman could be sued for discriminating against gays" combined with his already-present strong Catholic faith, he decided to donate to the movement. However, he told the paper that gays and lesbians are welcome to his hotels and restaurants.

It should be noted that this boycott is very specific. "Gay rights leaders say they are not targeting the Hyatt Corp. – which operates the Manchester Grand Hyatt – because the company has a good record in hiring and supporting gays and lesbians. But they are singling out the Manchester property."