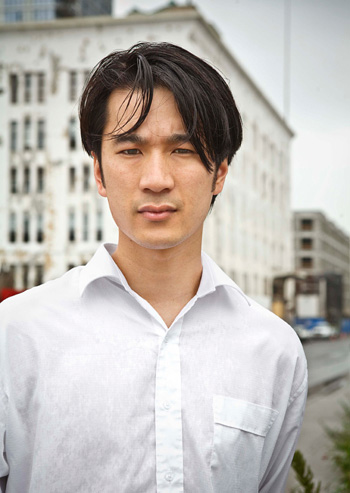 Nam Le was recently in town to read from and sign The Boat, a wildly diverse and intense collection of short stories that did not immediately strike us a short stories and which prompted an interesting dialogue. While we make a point in our author interviews to ask questions that would be of interest to our readers, we found that in this case, we were compelled to ask some pointed questions about our own reading experience as we started this collection thinking it was a novel. Over weeks of email and a meeting at The Dresden last week, we sorted it all out. And lest you think we are the only ones who are crazy enough to cry foul about the elusive "stories" title on the book cover, take a look at Antoine Wilson's review of The Boat that appeared on Sunday in the LA Times.

There is much discussion in the publishing world about how difficult it is to get a collection of short stories published. Even more difficult, so the gossip goes, is publishing an unlinked collection of short stories – a collection without common characters from one story to the next, without an obvious place or overt theme tying each story together. How, then, did you come to write (and find a publisher for) a collection of short stories so wildly different from one another? Well, first off, thanks a lot for pointing out the fact that the collection’s all over the shop! Really. Second, I can tell you that I never imagined, as I was writing these stories, that they would end up in a collection – for pretty much exactly the reasons you mention. I was writing these stories just as I started seriously reading short stories, and in part the diversity in this book is attributable to my having become simultaneously smitten with so many stories of all shapes and narratives stripes. I wanted each of my stories to work completely on its own terms, to answer solely to its own aspirations.

As for how they came to be published – a couple of years ago I holed myself up for seven cold months on the top floor of a barn in Provincetown to work on a novel, but found myself compulsively returning to and rejigging these stories. Finally I set the novel aside, knuckled down on the stories, collated them and sent them to my agent to hold in escrow. (He too was waiting for my novel.) I told him not to let me touch the stories again. He read them, then told me he thought they were ready. At that point I realized how conventional wisdom in publishing works – it doesn’t, really.

Your stories conjure such detailed, complex worlds at precise moments in time (and the description of the book as “stories” is so difficult to find on the book cover) that our first instinct after reading the first story was that we were reading a novel. Even after the dramatic shift in voice and tone and subject matter from the first story to the second, we still felt there was hope we were reading a novel and we’d eventually learn more about that first character – Nam Le (we’ll get to that in a moment) – and how he was somehow linked to the characters in the stories that followed. Somewhere in the middle of the fifth story, it was clear we weren’t going to get anymore of Nam Le, the character, and we were stunned by how fully committed we were to that first story and we wanted more. Was there a conscious decision made by the publisher to lessen the overt marketing of the book as a short story collection? How did that come about? It’s strange, isn’t it? – what happens when a work of writing becomes a saleable product. Hooks and platforms come into play (like some bad stage production set in (an aptly titled, it occurs to me) Neverland). On the one hand, the publisher markets the collection as consummately collectiony – almost an anthology – stories that are (to use your words) ‘wildly different.’ On the other hand, why mention that they’re stories at all? I feel here as though I should defend my publisher’s honour – you’re right that the word ‘stories’ doesn’t appear on the cover, but it does appear (twice) on the back cover and (several times) on the inside flap. I suspect in no small measure that the designation was omitted from the front cover due to design considerations – it would have busified or baffled the austerity of Carol Devine Carson’s design (which, I’m stoked to say, was recently selected for this year’s American Institute of Graphic Arts ‘50 Books / 50 Covers’ show). Speaking for myself, I didn’t mind the omission of ‘stories’ from the cover because it muddied not the line between novel and story but between fact and fiction; I took a perverse pleasure in knowing that a set of readers would approach the first story as autobiography. (Also, ‘stories’ is arguably less descriptive than ‘fiction,’ as half of them come in at near-novella length.) 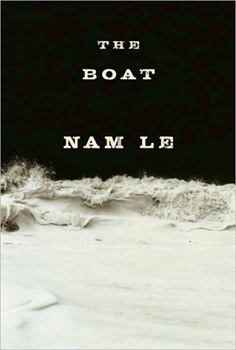 Because we thought The Boat was a novel, we really committed to the characters in the first few stories. So much so, that we began to think more about how most short story collections are approached by readers: with the full knowledge that they are short and will only give you a glimpse into a life. When many read a short story, they have a different set of expectations than when they read a novel. Yet you subverted that entirely in a way – these are not linked stories and each one is so full of interesting characters and situations and struggles that they are easily the kernels of much longer stories, possibly even novels. So rarely do we read a short story and want more. We’re almost ready for it to end – yet we wonder how much of that is because we know it will end soon given the form? You have said that short stories immediately interested you when working at Iowa Writer’s Workshop? What about the form interested you? What are its limitations? Strengths? Unique challenges? This is probably wrongheaded, but I’m determined to take it as a compliment that you were holding out hope that the book was a novel so deep into it! (Plus you must be the only reader who wanted more of ‘Nam,’ the petulant, alcoholic, self-absorbed and self-conscious character of the first story.) I’m bloody fascinated by how your brain must have calibrated itself to accommodate each new whacked-out story within the ‘novel’ in your head. Someone once told me that our brains are geared to narrative even outside of time; that when you’re having a narrative dream, for example, and the alarm clock rings, your brain immediately creates an (internally plausible) account that weaves the ringing into the original narrative. I don’t know what’s more amazing: that the brain is capable of creating, in a split second, this often complex stop-gap narrative – or that it’s wired to do it at all!

In any case, I’m intrigued by your experience. Nowadays there are scientific accounts galore confirming what readers have always known: that our brains actually react (chemically) differently to a written stimulus depending on the expectations we bring to it. Think of how we come to a piece thinking it’s a news article, or a fiction excerpt, or a prose poem. I’m interested, not least on a technical level, how the choices made in the first story (re pacing, structure, scene selection, temporal manipulation) scanned in your reading of it as a novel chapter. Did it jump around too much? Did it feel too self-contained, conclusive? I’m interested, on a sentence and page level, in how some stories can feel like compressed novels, others like slices of novels, others like their own thing completely – and some novels like novels, others like short stories with more words in them. I remember reading Don DeLillo's story, “Still Life,” I think it was called, in the New Yorker, then the novel, Falling Man, from which it was cut and spliced. Both worked beautifully, I thought, to the point where – even though they were constituted from the same set of words – each called upon the other to justify itself. The short story carried the implication that the novel was more of the same, but to lesser effect, while the novel strongly implied that only its longform was capable of marshalling and containing the accrued emotional effect. I know I haven’t answered your questions – and have actually chucked in more of my own. Here, then, is one answer: the moment I know to leave a story is, paradoxically, when I feel I’ve laid the groundwork for something bigger and broader. I’ll always try to make sure I’ve done the hard yards – that I haven’t shied away from any scene or development or point of tension – but at the point I feel that I’m invested, that it would be less uncomfortable going forward, that I want more – I’ll know that I’ve probably had enough.

So you named a character after yourself…how did that come about? And after all the questions about this – are you secretly wishing you hadn’t? I’m pretty predisposed against self-consciousness in writing (as readers might gather from the other stories) – so it was actually quite hard for me to stick ‘myself’ front and centre in that story. Basically it came about because the operating principle of that story demanded it: namely, the principle that I not take any of the easy outs on offer. I named the character ‘Nam’ because yes, I wanted to explore that same notion we’ve been discussing about reader expectations – how they influence aesthetic engagement (in this case expectations of ‘autobiography,’ ‘fact’ or ‘truth’ in a story clearly marked – inside and out – as ‘fiction’), and yes, because that character needed to be named ‘after the homeland [his father] had given up’ – but maybe chiefly because the very idea made me so uncomfortable I came to realise it was vital. As for whether I wish I hadn’t done so … I figure it’s reached a certain saturation point now I’m getting questions about getting questions about it, right?

Nam Le was born in Vietnam and raised in Australia. He has received the Pushcart Prize, the Michener-Copernicus Society of America Award, and fellowships from the Iowa Writers' Workshop, the Fine Arts Work Center in Provincetown, and Phillips Exeter Academy. His fiction has appeared in venues including Zoetrope: All-Story, A Public Space, Conjunctions, One Story, NPR's Selected Shorts, and the Best American Nonrequired Reading, Best New American Voices, Best Australian Stories, and Pushcart Prize anthologies. He is the fiction editor of the Harvard Review.

Read the first story of The Boat and follow all of Nam Le's interview and review coverage at www.namleonline.com.