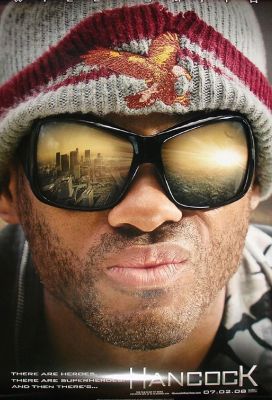 Hancock is a nearly great movie. I suppose that means it was only good, but that obscures the fact that, unlike other good movies, it could have been great.

Will Smith's latest flick tells the story of an alcoholic superhero addled not so much by his addiction to hard liquor, as much as his plunging loneliness. As such, he is a depressed and lonely fuck who believes he is the only one in the world (or at least Los Angeles, where the movie is supposed to take place) who can fly and perform amazing feats.

His psychoses and subsequent boozing manifest themselves in incredibly destructive and fantastically entertaining ways. Near the beginning of the movie, before we've met Hancock, a team of Filipino or Taiwanese thugs who had just ripped off some type of establishment are traveling on an L.A. freeway, tailed by a bevy of LAPD cars and news helicopters. The car chase rages on with a hale of gunfire from the gangsters streaming toward the cops and cars that happen to be driving at the exact same moment the pursuit is happening.

Hungover and unshaven, Hancock is pressed into action and rips open the top of the car, sits in the middle and eventually places the vehicle atop the needle on the Capitol Records building, leaving thousands of dollars of damage in his wake.

Our hero is reviled (though he just saved the lives of many Innocent bystanders and police and left the gangsters alive -- hypothetically allowing some prosecutor to make a name for himself when a jury returns with a guilty verdict months later). The public crucifies him as a danger to society and, though realizing he can do things they can't and cops can't, call for his imprisonment.

This is truly fascinating. We only know superheroes from comics and movies and in those comics and movies, those superheroes are born to alleviate some great ill in society. Batman is charged with cleaning up the super criminal underworld in Gotham City (as was Robocop, though his criminals were more ordinary looking and, arguably, more violent); Spiderman takes on evil geniuses bet on civil domination, and so forth.

But Hancock is asked to fight crime in modern day Los Angeles, a city (in the movie) that looks remarkably like our city: that is to say, there is a gang problem and bank robberies and car chases. But people seem to get by. The streets are not empty at night and the gravest danger seems to be pollution. They obviously don't like the crime and, ostensibly, wish it wasn't there, but they get by.

And they get by with Hancock, an every man's superhero; a person (he sleeps, has a trailer he sometimes lives in, gets hungry, thirsty, etc.) who has this one great power but is stricken by a demonstrably powerful force: depression.

It affects his job, his personal life and his ability to make friends. Not everyone in life can identify with that, per se, but everyone can relate to that. Superheroes, they're just like us. And this is what leads the good people of "Los Angeles" to say they've had enough with Hancock. He eventually is jailed for his expensive shenanigans, gets out of jail when people realize they can't live without him and saves the day.

Of course, his saving the day and ultimate happy ending (you already knew it was coming), is what shuttles Hancock from the great category to the merely good. I understand that we need superheroes in movies and our lives. Superman was created when Hitler ruled Europe and a young group of Jews created a super man to help lift spirits and get the bad guy. Ever since, we have been with superheroes that have fought crime and made the world a better place all the while providing a unique form of escapism.

Were Hancock the only superhero actively working Hollywood, a happy ending to Hancock would have been unavoidably and acceptably predictable, I suppose. But I can count at least three other superheroes debuting this summer who will rid their respective cities and worlds of crime, all the while fitting in a cocktail party and/or one liner about their bout with evil. They (will) all had (have) relatively happy endings that will ensure a sequel (or threequel) can be made and we will have left the theater hoping it was summer 2009 already.

We didn't need another happy ending. We didn't need another superhero movie where everything works out and everything works out for the world because, well, all is not right. And I don't even mean the war, or recession or the fact that it's 130 degrees outside. Nor am I being overly morose. I'm just saying that life, most of the time, is boring and things don't always work out the way they planned.

And that's OK. I think we've all done pretty well with living with our deficiencies and psychological shortcomings. Yes, movies are an escape that allow us to dwell in fantasy for two hours. That's valuable and prevalent. But why can't we have a superhero movie where great capers are had, and things don't always work out? I will venture that a guy who flies, drinks too much and is destructive for the film's entirety would actually play better than a clean and sober superhero who just merely flies, which ends up being precisely who John Hancock is.

A flawed person with super powers: a concept I hope we can one day see in film.