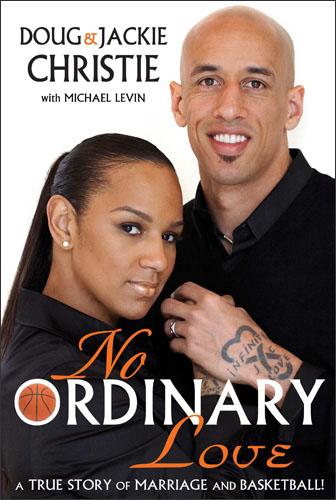 On Wednesday, the city of Seattle found out that their SuperSonics would be packing their bags and leaving for Oklahoma City. Thanks to owner Clay Bennett, in 2008-09 there will be no pro basketball in Seattle for the first time in 41 years. "He drained the Sonics' joy out of Seattle," said Seattle Times' columnist Jerry Brewer of Bennett.

Cheer up Seattle. It's not all gloom and doom. Some good news for the city arrived via a press release that crossed the wire late last night which stated that Former Laker/Laker nemesis Doug Christie and his wife Jackie have chosen Seattle's Space Needle as the location for their 13th wedding. Seattle may have just lost their NBA franchise and the 1,200 jobs the team supported but a Christie wedding only comes around once...every year, actually.

That's right, every July 8th. If you're one of the nine people who watched The Christies: Committed, the couple's reality TV series which aired on BET J, you'll recall Jackie saying "If we're always planning a wedding, we don't have time to plan a divorce." Once a year, Doug says "I do" in an extravagant ceremony to the same woman who rushed the Staples Center floor to throw a couple haymakers at Shaquille O'Neal back in 2002 (video after the jump, because it never gets old).

Doug, who ended his NBA career as a Clipper after signing a 10 day contract in 2007, avoids eye contact and conversations with women, telling the New York Times in 2002, ''Every conversation I've ever had with a woman since we've been married besides my wife she knows about." In that same article, Jackie said, "''Doug is allowed to look at females. I would prefer he didn't.''

While not looking at other women for the last 16 years may have helped this "power couple" survive, it has caused Doug to miss out on quite the era of eye candy. Jessica Alba, Gabrielle Union, Scarlett Johansson, Jessica Biel are just a few of the women, Doug has probably never had a chance to see.

When Doug is not busy looking at everything other than a woman not named Jackie or complaining about the 2002 Western Conference finals, he and his wife are steadily trying really hard to crossover into media superstars. Last year the couple wrote a book, No Ordinary Love: A True Story of Marriage and Basketball and produced a straight-to-DVD movie The Christies Un-Cut.

Not only are the Christies brightening the lives of the people of Seattle with their ceremony, according to the press release Doug and Jackie are also donating $100,000 to charity in honor of their anniversary.