LAistory: The Wreck of the Dominator

LAistory takes us on a journey to what came before to help us understand where we are today. So far we've been to Val Verde, Thelma Todd's Roadside Cafe, a house in Beverly Hills, Echo Park's Bonnie Brae House, Marineland of the Pacific, and Grand Central Air Terminal, Wrigley Field, and the moment LA got its name.

The lobsters caught off of Palos Verdes have always been known for their delicate flavor. The reason they were so delicious, is that like prized cattle, these lobsters were grain-fed. For years, crustaceans in Lunada Bay lived off of the wheat from a sunken Greek freighter, The Dominator.

The Dominator ran aground on March 13, 1961 at the point between Lunada Bay and Malaga Cove, near Rocky Point. Carrying a load of wheat and beef from Vancouver, B.C, the vessel was trapped by the current after coming too close to the cliffs.

Local sailors believe that heavy fog prevented the crew from seeing the point that jutted out between them and their only beacon, the San Vincente lighthouse. The bay may have given the false impression that they were further out to sea. Others believe the crew was under the mistaken impression they had already arrived in the Los Angeles Harbor, and were attempting to turn into the harbor when they ran aground. 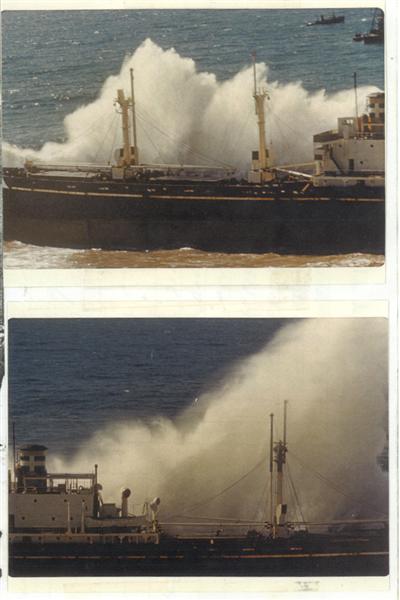 In The Last Voyage of the SS Dominator, JE Hardison tells the tale thusly:

On March 13, 1961, the Greek owned Liberty ship “S.S. Dominator”, carrying ten thousand two hundred tons of wheat from Portland, Oregon en route to Algiers, was on a heading to Long Beach, California, to take on fuel.

At 5:30 PM, she was proceeding through a dense fog at reduced speed, searching for the entrance to the harbor. Captain Papanicolopoulos (this is his real name), was on the bridge directing his thirty-man crew and his old and tired World War II freighter, without modern navigation equipment, not even radar, but the Dominator was doomed.

Suddenly, without warning, the fourteen thousand tons of ship and cargo came to an earthshaking, grinding, sudden stop, one hundred yards off Rocky Point on a rock reef.

Once the ship was trapped by the current, it was at the mercy of the elements. During high tide, there were attempts made to pull the ship into deeper waters, but to no avail.

The Coast Guard and tugboats were unable to pull the ship off of the reef. Finally, after two days, the crew of 35 abandoned ship (other reports number the crew at 29). Surf pounded relentlessly at the 441' freighter, driving it into the rocks.

Days later, a group of seven to fifteen young men had to be rescued after swimming out to board the ship. The LA Times is quoted as saying it was partly thrill-seeking, and partly the misconception that they could take possession of the ship. Concerned about being stranded on the boat after dark, the men jumped back into the sea and became trapped in a vicious riptide, where they suffered cuts and bruises. 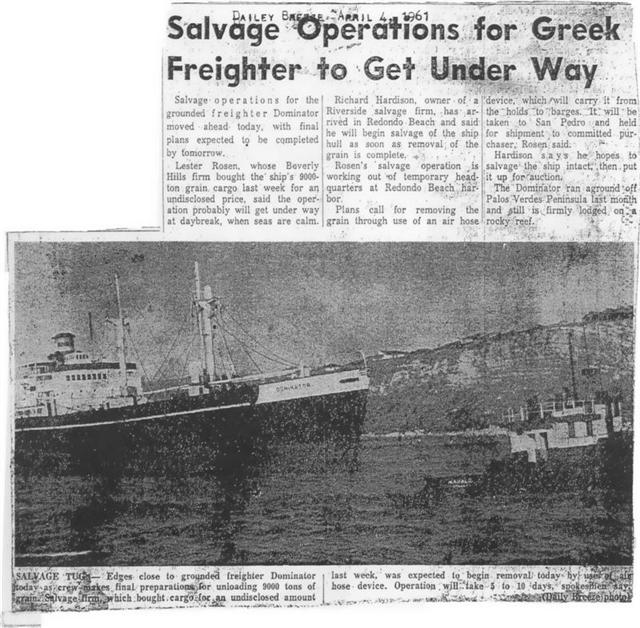 Residents have watched over the years as the sea slowly destroyed the wreckage, until finally just a few bits of the hull and bow remain scattered on the shore. More of the boat is visible at low tide.

There are two routes by which to access the wreckage today. Experienced hikers and climbers can make their way down the steep cliffs, but must be cautious of the rocky terrain. It is recommended you go at low tide, be prepared to get wet, and keep an eye out for interesting tide pools.

"The nearest access point is the park along the cove to the south. A different trailhead down to the beach leading to the site begins about 2 miles north along the coast on Paseo Del Mar between Via Horcada and Via Almar in Palos Verdes Estates, California." The Daily Breeze gives the address as 31550 Palos Verdes Drive West, Rancho Palos Verdes. Detailed hiking directions.

Boats passing by can still barely make out a few shards of metal. You can anchor your boat and take a kayak or dinghy to the wreckage -- there does not appear to be dangerous shards that could pierce a small vessel. But you never know. Surfers in the area are notoriously territorial, so surf at your own risk.

You can also snorkel or dive the wreck, but only in calm conditions. The sea churns up a lot of sand, and there is a lot of kelp in the area, so visibility is not the best. Diver and shipwreck afficionado Phil Bergeron, told the LA Times, "...a diver can actually go inside and be enclosed within part of the wreck, You're actually down in what they would call the bilge area, the bowels of the ship."

Wreck Diving, from the LA Times

Special thanks to Incarnate for recent shots of the wreckage