LAistory: What's in a Name? 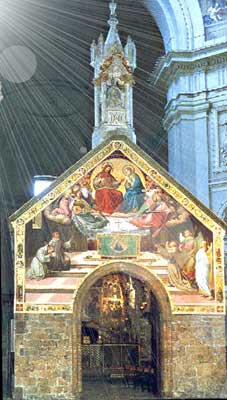 LAistory is a series that takes us on a journey to what came before to help us understand where we are today. So far we've been to Val Verde, Thelma Todd's Roadside Cafe, a house in Beverly Hills, Echo Park's Bonnie Brae House, Marineland of the Pacific, and Grand Central Air Terminal, and Wrigley Field.

Los Angeles. L.A. The name is so familiar. Whenever major cities in the U.S. are named, Los Angeles is always there. But while New York and Philadelphia have no secrets in their names, quite the opposite is true of Los Angeles. It's not the actual name of our city — it's an abbreviation. Okay, you say, I've heard that, everyone knows that the city is named Our Lady Queen of the Angels. So it's named after Mary, mother of Jesus. But you'd be wrong.

Early Spanish settlers named the tiny village they started El Pueblo de Nuestra Señora Reina de los Ángeles de la Porciuncula. The direct translation is The Town of Our Lady Queen of the Angels of the Little Portion. But what's this Little Portion thing about?

The original settlers were Franciscans, meaning that they were followers of St. Francis of Assisi. St. Francis himself lived in a tiny chapel in Italy in the 13th century. After his death, this chapel became an important attraction for pilgrims (no, not the ones who came over on the Mayflower.) By the 14th century they had to build a church that encompassed both the small Porziuncola (what the chapel is called in Italian), as well as Cappella del Transito, the infirmary hut where St. Francis died.

At some point, someone painted a fresco there of the Virgin Mary surrounded by angels and it became known as "Saint Mary of the Angels at the Little Portion" (Or as they say in Umbria, Santa Maria degli Angeli di la Porziuncola.) Who would have guessed when they named a little pueblo after their holiest place that it would one day be the sprawling, smoggy, godless town of hedonistic heathens that it is today?