Singer-songwriter Dan Wilson is best known as part of the Minnesota power-pop movement of the late '80s and early '90s. He was a member of Trip Shakespeare and lead singer of Semisonic. Late last year after producing and collaborating with artists like Jason Mraz, Rachael Yamagata, the Dixie Chicks and Mike Doughty, he finally released his own solo album, Free Life. It's a quiet, slow burn of a record, much different from the pop-rock of his earlier musical ventures.

LAist sent over a few questions for Wilson, who played at the Hotel Cafe last Thursday night and will play again on July 10. Here's what he had to say about the new album: 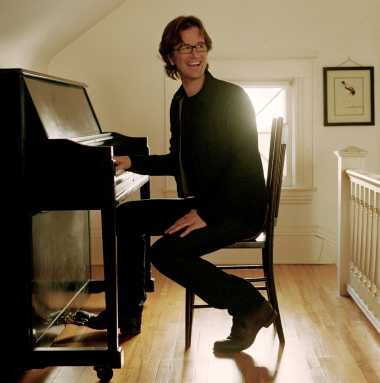 Dan, you've been in the business for 20+ years...why wait so long to put out a solo album?

I hadn't thought about that, it does seem strange. I made a live solo CD in 1997 or so which probably doesn't count. So it did take me a long time to make a solo album. But I think it took me a while to learn how to do a lot of things. While I was in Trip Shakespeare I could barely write a song - my best work in that band was helping my brother Matt finish some of his songs. But I really didn't know how to do it yet. And as for Semisonic, I think I found that band such a good vehicle for my ideas that for most of those years it didn't occur to me to try to record on my own. I think the thing that came up was that the sound of the band became more and more of a known entity, a sound I was obliged to write for. I can't always get my creative mind to play within those limitations. So at the time that Free Life started to come together, I was writing lots of songs that sounded almost like folk songs. And they were more personal and less "from the mountaintop" than Semisonic songs. There was room for one of those really personal acoustic songs on every Semisonic album, (like "Gone to the Movies" on Feeling Strangely Fine) but I was suddenly writing tons of them.

Free Life seems a bit mellower than your earlier writing. Is that the case? How have you changed as a songwriter and performer during these years?

I think I've always aspired to write radically simple songs, using the minimum words, things normal people would say, and the fewest, simplest chords to support the music. It hasn't always worked out that way but it's always been in my mind to do that. I think I've gotten better and better at that and somehow at least for Free Life that simplicity and directness brought with it a gentler, more acoustic sound. I think I was also excited to be making a sound that was different from all the rock band music I'd made for so long.

I think one big change in the past few years is that I've learned how to do a gig alone, or nearly alone. I've learned how to make the most of a small number of moves I know how to do on the guitar, and how to make the most of the storytelling aspect of singing songs. It turns out that a lot of my songs work well in that really naked setting of just me, a guitar and the crowd.

You've worked with some great singer-songwriters as a producer and collaborator (Dixie Chicks, Mike Doughty, Jason Mraz, Rachel Yamagata)...did they seek you out? And how do you approach producing someone else's music to your own?

I think in all those cases we were brought together by mutual friends or third parties who thought we could make great music together. So these collaborations have all been things that kind of fell in my lap, just owing to a reputation I might have or to a song of mine that someone might have heard. I think it's strange that I rarely seek anyone out to write with, although this year I've started to try to change that. Take my future into my own hands a little. Obviously, it's worked out fine to just stand out in the road and catch a ride with whoever's passing by. I've been extremely fortunate.

What one song in your Trip Shakespeare, Semisonic or solo repertoire do you not get sick of performing?

I never get sick of any of my songs! I'd be happy to play any one of them right now. (If I can remember the chords.) I'm the kind of person who can have the same breakfast for a year and never need any variety. I've never understood artists who have hot and cold relationships with their hits. I love playing my songs! Good grief.

It helps to have a lot to choose from, my problem is more often that I have too many songs I want to play. But if people want to hear "Closing Time" and "Free Life" and "Singing in My Sleep" at a show in ten years, I'll be ready to play them.

You left Minnesota to finish tweaking Free Life here in LA...what's one thing (besides the weather) that you like about our city?

I love LA's musicians. I have always been the kind of music fan who reads the album credits and knows who played on what songs, and it's beyond a dream come true to be able to come to LA and ask those same people from the album credits to play on my songs.