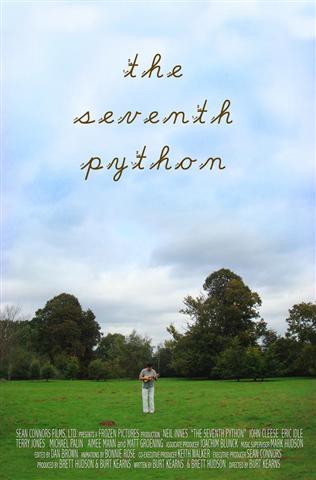 There are a number of inherent contradictions in making a film like The Seventh Python. First of all, how do you spend two hours focusing on a person who notoriously shuns the spotlight?

Innes expounds upon his distaste for fame in a film that by its very existence could make him famous. It is a little ironic when his face is exponentially duplicated to fill the screen like a Herbal Essences commercial (..and they told two friends, and so on, and so on, and so on...), while Innes sings "Joe Public", his ode to the mundane everyman.

Secondly, there is the challenge of making a documentary comprised of talking head interviews and concert footage when your subject is perhaps best known for making The Rutles, a film that mocks that very formula.

Somehow The Seventh Python manages to pull it all together using visual effects, editing techniques and witty commentary, all the while keeping focused exclusively on Innes' professional life.

The film is subtly enhanced with a sprinkling of animation. Bonnie Rose, who founded www.neilinnes.org adds a style that is clearly in tribute to Terry Gilliam, even down to the crushing foot of fate. Other visual effects such as the previously mentioned duplication and split screens are used to keep the eye entertained while the ears do the heavy lifting.

In a particularly successful scene, Innes' attention to an airplane flying by cuts to a shot of an airplane, then to a shot of Terry Jones, whom we have already mentally established is in some distant location, as he pretends to hear the same plane pass overhead. It is an inspired moment that harkens back to the overlapping skits that made Monty Python great (Come back, Harold!).

Rockumentaries often have trouble finding the right balance between music and narrative. Most rock docs have no patience and start narrating over songs just as you are finding the groove. The Seventh Python strikes a nice balance, knowing to back off and allow "The Philosopher's Song" and "Let's be Natural" to play uninterrupted, while cutting into some of the longer, less iconic tunes.

The Bonzo Dog rehearsals follow Innes through a medley-like arrangement, another technique to avoid monotony. I almost wish they would exploit the similarity to a late-night K-Tel commercial and go for the gag, running song titles up the screen.

This film traces Innes' career from his earliest days with The Bonzo Dog Band and the childrens' show Don't Adjust your Set, around the bend to Monty Python and just over the river to The Rutles until it gently slopes back to today. It covers his influences, from Magritte paintings to dusty 78s, and offers lots of fun, insider tidbits to chuckle over on fan sites.

Naturally, the commentary is hilarious; we would expect nothing less with friends like John Cleese and Michael Palin. Phil Jupitus is particularly funny, driving the audience into hysterics simply talking about Innes wearing a hat.

What you won't see up on the big screen is Innes' personal life. The closest you get is a short commentary from his wife, and some nostalgia regarding the death of George Harrison that Innes quickly nips in the bud. Such respect for the boundary between Neil Innes the man and Neil Innes the performer can only come from Burt Kearns, a director who penned the expose on tabloid journalism.

Kearns proves here that the public exhibition and evaluation of emotional scars large and small is not needed to provide insight into the heart of a subject. This movie makes you admire Innes. It makes you like him as a person. It makes you want to be his friend. He comes off as quick-witted, approachable and clever. Even at his most mischievous he remains guileless. Who else but a self-aware pedant would dare rhyme "pedant" and "dead ant"?

This movie succeeds by coaxing its subject to open up just enough so that we do feel like his friend. The Seventh Python allows the audience to walk out of the theater with more than a taste of Neil Innes, but without having swallowed him whole.

Tonight at 7:30 Innes performs live at The Egyptian.

Stay tuned for coverage of the movie premiere. Innes, along with director Burt Kearns and producer Brett Hudson were on hand for a Q&A with impresario Martin Lewis.

Photo courtesy of The Seventh Python.