Roxy 2.0: How Social Media Brought the Club Back 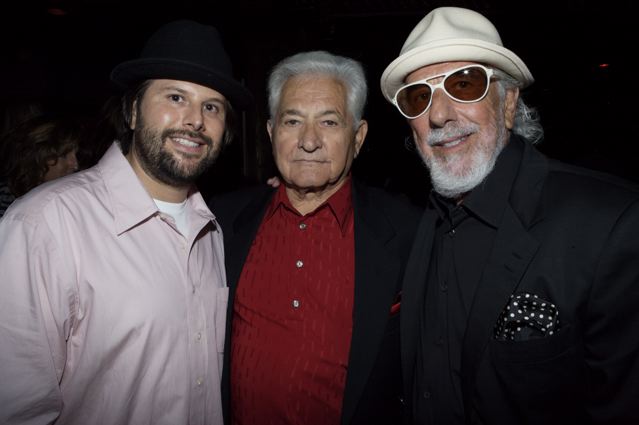 Nic Adler (left), Mario Maglieri, and Lou Adler at the House of Blues. The elder Adler was honored along with fellow Sunset Strip icons Maglieri and Elmer Valentine on the eve of the 1st Sunset Strip Music Festival. | Photo via The Roxy.

Nic Adler grew up at The Roxy. His father, Lou Adler, opened the club the year Nic was born. He would spend his afternoons after school at the club and grew to dislike the rock music it became so famous for spotlighting.

At 18 Nic tried his hand at promoting rap shows and, along with David Faustino (of Married With Children fame), had a successful year-long run promoting hip hop on Thursday nights at The Whiskey, where the likes of Xzibit and will.i.am were known to engage in rap battles.

And Lou worked the box office on opening night.

In the late 90’s Nic Adler stepped in to help out at the club and within a short time he was in charge. For many years the club was four-walled and kept alive by Goldenvoice. There were no in house bookings and little was being done to promote the club itself. There was a strict policy in place, no photos or cameras allowed. 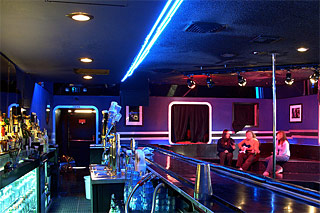 After Goldenvoice left, Adler hired an in-house talent buyer and began booking shows at The Roxy. They put in a bigger bar downstairs and re-opened the famed room upstairs, On The Rox, for private parties and smaller bands. The club focused on big acts and pay to play locals but it soon became apparent that what was once ground zero for the late 80's rock scene was losing its lustre. Additionally, the clientele had changed and aged, and the Sunset Strip was no longer the go-to for live shows with the emergence of the East Side scene and venues such as Spaceland and The Echo.

Adler realized that radical change was needed as the venue could no longer rely on reputation alone. It was no longer “cool” to play at The Roxy, unless you were a hair metal band. It was getting harder and harder for The Roxy to be competitive.

The final straw came in October 2006. Adler was driving up Doheny on his way to the club when a sign-flipper tapped on his windshield with a big GOING OUT OF BUSINESS sign, for Tower Records. He had grown up with Tower Records right down the street from The Roxy. He knew that if he didn’t do something to turn things around…The Roxy, and the rest of the Strip would be next to go.

Adler turned to the Internet. He created a MySpace profile for the club. Within three weeks he saw an impact on the club. Earlier that year he had hired Megan Jacobs, former talent buyer for Temple Bar, in attempt to bring in some new talent to the venue. Jacobs introduced Adler to online media specialist Kyra Reed in November of 2006, and Reed brought the change he was looking for. 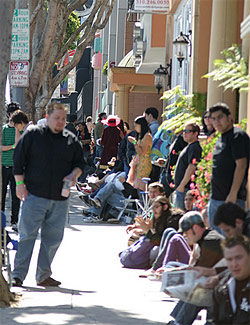 Reed convinced Adler that the future was online and it was time to be bold. The Roxy website ditched their old-school site and moved to a blog format. Furthermore, Adler took the spirit of community and transparency a step further by including listings for other businesses and venues on the Strip. This radical departure from the competitive nature of the industry has made an impact, although few -- if any -- venues have followed suit with their internet presence. Adler is admittedly hooked on social media now and it's apparent -- The Roxy, which only years ago went after camera-wielding patrons, now has a massive presence on the web and even hosts user-generated photos and videos on the site. The Roxy is also one of four nominees for Best Rock Site for this month's VH1 Rock Honors.

The staff at The Roxy embraced the blog and the blogosphere at large. They've expanded their horizons beyond the rock staple that had become synonymous with The Roxy and began booking more “eastside” bands like Peter, Bjorn,and John and started a three-month partnership with Filter magazine.

Adler realized that blogging and social media presence could be more effective than old-school advertising and he tabbed Annie to blog and interact with the online community regularly.

During the writers' strike, The Roxy offered free tickets to shows for writers out of work. Adler increasingly uses the Roxy Twitter account for spontaneous ticket giveaways and behind the scenes anecdotes from soundcheck.

The Roxy's website traffic has gone from 500 visits per day to over 3,000, all without a proper advertising or marketing campaign. And by listening to the audience and responding, the Roxy is seeing more and more sellouts, not to mention booking month long residencies with comedian Russell Brand to Camp Freddy and (this month) DJ AM with Travis Barker.

Adler still describes the Roxy as home, often busting 15-hour days all week and he thinks of his staff as family, most employees from the door to the bar to the back office have worked there for years, he says. He hopes to extend this open-door, family feel to the community and the clubs across the street formerly considered the competition. The club is now filled with bloggers, promoters and media that had turned their noses up at The Roxy just months ago.