Fighting to Keep the LA River a River 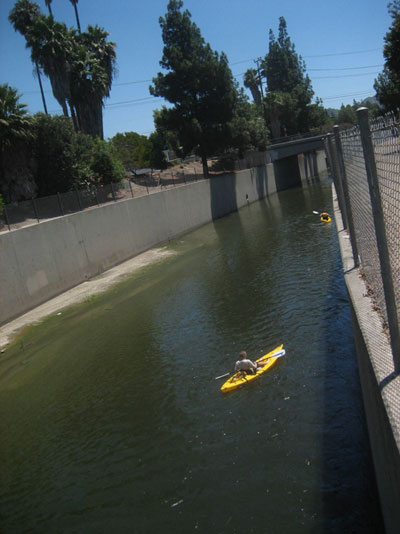 If the decision is allowed to stand, "it would greatly undermine federal protections both for the LA River and the ephemeral streams and tributaries that feed into it," according to Damian Carroll at Assembly Mike Feuer's office. "This issue is of particular importance in light of the City's work in developing the Los Angeles River Revitalization Master Plan."

It is currently illegal to boat in the LA River for safety reasons, but "the fact that it has been accomplished provides credible evidence to overturn the Army Corps' finding," Feuer wrote in a letter to Stephen L. Johnson of the EPA. Feuer also noted in his objection to the Army Corps' finding that the city and other agencies have spent "countless hours" creating the Los Angeles River Revitalization Master Plan that includes permitted boating and river recreation.

Photo: A father and son kayak in the LA River in August, 2007, in Sherman Oaks (story and photos here) | Photo by Zach Behrens/LAist