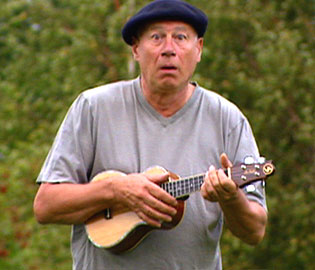 Neil Innes is nothing if not a gentleman, a distinctly British one at that.

Innes was - literally - the John Lennon of the Rutles, recently memorialized here with a thirtieth anniversary showing of the great Beatles-taunting mockumentary All You Need Is Cash that put the four principal actors on stage together for the first time. The anniversary of the film was also marked with the premiere of a multi-media stage show, Rutlemania, that featured an unbelievably accurate Beatles cover band playing slavish covers of Rutles tunes and re-enacting their faux history as if it were the Civil War.

Innes was also one of the two principal writers for the beloved Bonzo Dog Doo-Dah Band, purveyors of psychedelic music-hall comedy that a times felt like an English Mothers of Invention indulging latent oom-pah fixations. But Innes remains best known in this country for his musical contributions to Monty Python, for whom he served as “music guy” and occasional sketch writer through the Holy Grail period, one of only two people to receive writing credit for Python besides the six core members. So despite a long and varied career, it’s perhaps inevitable that the documentary dedicated to his life, which premieres tonight at the Egyptian Theater, would be titled The Seventh Python.

Director Burt Kearns' previous work will probably be familiar to many in the audience, though they may not know and might not admit it: much of his resume is in tabloid TV, including stints directing A Current Affair, Hard Copy and When Good Pets Go Bad II. His experiences on the front lines of exploitation led him to write the book Tabloid Baby, which he calls "part mea culpa, part expose", in 1999. To say the least, its publication earned him no love from his former employers. With this film, he hopes, if not to make Neil Innes into an actual celebrity, at least to level the market share a little.

Innes himself hasn't seen the final cut of the film yet. "I'm not sure if I'll have to walk round the theater until it's over," he says from his room in Hollywood. Despite any last-minute jitters, he sounds more than pleased to be here, and talks most excitedly about his latest work, including a 2007 Bonzos album, the first full-length since 1971.

Being the subject of a documentary, which I presume you've now seen, was there anything surprising that you learned about yourself while watching it?
No question, it's one of the oddest things I've ever found myself doing in my life. Because it's not my film. And it shouldn't be my film. But it's funny to see my friends saying nice things because they're normally very rude to me. So it's a little bit hard to take (laughter.) I am still naturally quite shy. But a lot of it I quite like. I think John Cleese is very funny, Phil Jupitus is very funny.

But I haven't seen the final cut, I saw it when it had everything and I did say, cut it down so that someone who never knew anything about me would get something, but don't dwell on things too much.

What can you tell us about the live show on Friday? Is this a band show?
I'd love to have had a band... the daft thing is, basically, I'm doing a benefit for Cinematheque. Most people come out to Hollywood to get in a movie and make a lot of money; I come to Hollywood and do a benefit for a cinema. But that's true to form. (Laughter.) You see, Cinematheque and I have a lot in common, both of us are non-profit.

No, it'll be a one-man show. There just wasn't time to do that sort of thing. Actually a couple of guys, Ken Simpson and Ken Thornton, are coming from Illinois...and they'll pop up and play a bit.

Listening to the Bonzo Dog Band albums this week, it struck me that they have a very soundtrack-like quality to them. I know you did some short pieces for British television but did the Bonzos ever consider doing a full-length video?
We have had a reunion recently, you know, in 2006, there was one show for the fortieth anniversary and that turned to be so popular, we did a tour of, I think twelve cities. And then this last year, we made a new album called Pour L'Amour Des Chiens, which is, I think, really... good! In this day and age, people trying to put out CD's, you know... You can get it on the website, or go to Amazon, they've got it. I think it's great listening for a Bonzos fan. Of course no one can replace Vivian (Stanshall, the other head writer and lead vocalist who passed away in 1995.) But we've got some great people, Phil Jupitus, Ade Edmondson...and the deluxe edition's GOT a free DVD in it!

But as far as Bonzos, you know, none of us are getting any younger. We had our little reunion, and I think that should be it, really. We should move on to pastures green.

I've read the stories about Keith Moon joining the Bonzos for a handful of shows, how did that work out? That's not a guy known for excessive preparation. With the kind of arrangements you guys worked with...
Oh no, no, no. Bonzos live did not involve excessive preparation! (Laughs hysterically.) So it was a mutual approach.

What was it like watching Ron Nasty portrayed by a stage actor in Rutlemania?
I thought the Fab Four (the Beatles cover band that portrayed the Rutles on stage) were brilliant. They play the music so well. My only criticism was, you can't tell they're playing live. I thought, "Well cut loose!" you know. They had to do everything with earpieces, to synch up with the films, which I gather is how Beatlemania was done as well. That was also a multi-media show. But I thought it turned out pretty well, the new songs from Archaeology, that moment where Leggy had gone to Australia, I don't know why, but it's quite moving. And John (Halsey, who played Moptop drummer Barry Wom) and Rikki (Fataar, guitar, the quiet, swarthy one) liked it, too, that was the first time we'd all been together since we'd done it.

It was also the first time you'd performed together.
Oh that's right! We did have to get up and do something with that kind of Keith Moon-ish "excessive preparation."

The Seventh Python has its world premiere tonight, Thursday, June 26, 2008 at 7:30 PM, as part of the Mods And Rockers film festival, presented by American Cinematheque at the Egyptian Theater, 6712 Hollywood Blvd, Hollywood. Also on the bill is the US theatrical premiere of a film of the Bonzo Dog Band's 40th Anniversary Concert in London.

Neil Innes performs a rare solo concert on Friday June 27, 2008, also at the Egyptian Theater as part of the Mods & Rockers Film Festival.

Tickets for both events available through www.fandango.com.