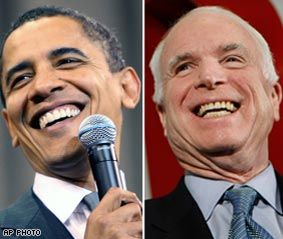 One week into the race for President of the United States and the biggest issue of this early national campaign has been a debate about debates. John McCain wants 10 town hall meetings, Barack Obama has said five might be sufficient and both have called each other's stylized stalling on the issue a sideshow aimed at drawing each other into political wedge.

McCain originally proposed holding 10 meetings once a week until the week before the Democratic Convention is slated to begin — including a July date at the Reagan library in Simi Valley he has already accepted — while Obama has offered to appear at five joint appearances between now and Election Day: three traditional debates plus a joint town hall on the economy in July and a debate on foreign policy in August.

"That package of five engagements would have been the most of any Presidential campaign in the modern era — offering a broad range of formats — and representing a historic commitment to openness and transparency," Obama campaign manager David Plouffe wrote.

Clearly, McCain, like most politicians, prides himself on his ability to connect with voters on a smaller, folksier level. He has already held two — one in New York city, the other in Nashua, NH — but before Republicans get carried away with populist rhetoric it is worth noting that McCain's NYC appearance was not open to the public.

ABC News's Bret Hovell reported at the time, "the audience of 200 at Federal Hall was not open to the public, unusual for a campaign that typically prides itself on allowing anyone into the room to question McCain."

The event raised no eyebrows (inside the hall, at least) and the only point of contention during the affair was whether McCain considered himself a hero for his service in Vietnam. (He doesn't. Others do. Riveting, I know.)

Ostensibly, McCain is pressing for a slew of debates to hash out issues relevant to this country. Ostensibly. But in calling these talks 'town hall' meetings -- traditionally discussions among smaller groups (as the 200 in NYC) in smaller towns (as in Nashua or Simi Valley) -- I can't help but thinking that McCain is trying to turn back the clock.

Reminding people of simpler times at a time when the country is embroiled in a recession, housing crisis and et cetera with a Republican named Bush running the show might not be a bad idea for people clamoring for a change.

Obama might have a vested interest in reaching back in time as well. Months ago, Newsweek and MSNBC's venerable Jonathan Alter compared Obama to Franklin Delano Roosevelt and Salon's Editor-in-Chief (and former Hillary Clinton shill) Joan Walsh said, "when I listen to Barack Obama speak about the economy, I think about FDR."

We could be in store for that much vaunted, fantasy presidential matchup beer-drinking politicos from the left and right always argue about: FDR vs. Reagan.

Fantasy matchups aside, there might be another political advantage for McCain to press Obama on holding more debates.

If McCain can successfully paint Obama as out of touch and, worse, unwilling to be in touch with American voters ("If he doesn't want to meet with me, what is he hiding" is the insinuation), the Arizona Sen. will have done something Obama's opponents have contended: that he cannot attract non-liberal Democrats or Republicans.

In a Washington Post article that appeared Sat. morning detailing Obama's rise to power via the corn fields of Illinois, reporter Alec MacGillis asks if Obama can he win over blue-collar America. The conclusion is a tepid, Yes, and enough for McCain to needle Obama on his appeal to farmers and steel workers.

For his part, Obama has shown he can attract middle of the road Democrats and moderate Republicans. He captured Kansas and Nebraska in the Democratic primaries there and leads McCain by

And, as the wrangling continues over when to debate, Obama can paint McCain as an obfuscater, an evader who would rather argue about having more debates than actually debating.

"Apparently they would rather contrive a political issue than foster a genuine discussion about the future of our country," Plouffe said.

The first debate for the two might come as soon as Thursday with California perhaps a month later. But there will certainly be many debates until then.