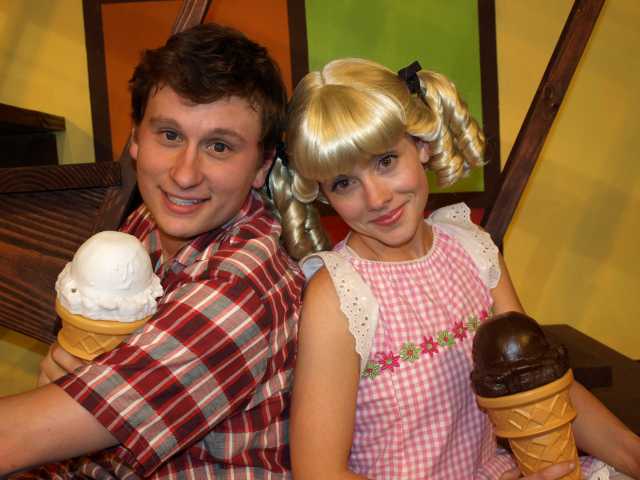 Adam Conger and Kelly Stables star as Bobby and Cindy on A Very Brady Musical / Photo by Matthew Hoffman.

You don’t have to be a fan of the iconic 1970 TV series The Brady Bunch to like the new musical satire A Very Brady Musical — though it does help when hearing seemingly random references to Marcia’s broken nose, Kitty Carry-all and building houses of cards.

All you really have to know going into this 90-minute jaunt of musical-theatre lite is that the Bradys were the antithesis of 1960s counterculture, then you’ll get a kick where the kids – in trying to raise money for marriage counseling for their parents – get in some serious trouble with the cops: attempted murder, armed robbery, prostitution and petty theft. What the kids don’t understand is that Mike and Carol are just in some serious need for “mommy and daddy time” because, well, they can’t seem to get any with six kids and a housekeeper in the house.

Very tongue-in-cheek like the Brady movies, there are 26 musical interludes – two of them being the recognizable Brady theme song. (Obsessed fans will probably be a little disappointed that Brady classics like “Time to Change” and "We Can Make the World a Whole Lot Brighter" haven't been included in with the new batch of music.)

Most of the songs work well enough to move the loose plot along. Some highlights included: Alice's "My Special Recipe," which showcased Kathy Garrick's strong vocals; "Greg's Car," where the kids joyously sang about Greg's Woody; Laura Marion played a crazy, insecure Jan to the hilt in "Totally Useless" and Bobby and Cindy (Adam Conger and Kelly Stables) did a song-and-dance number that has the audience in stitches. One or two songs, however, seemed to be thrown into the mix just because cast members didn't get equal singing time, which is perfectly fine, since not all of them are the best singers. (Sorry, Mrs. Brady.) As for the production, the stage is lit a little too brightly, which only calls more attention to the set changes.

Obviously, ticket holders understand that they're not in for an evening of Strindberg or Sondheim, but the pros outweigh the cons if you invest an evening with the Brady clan for a fun romp through suburbia.