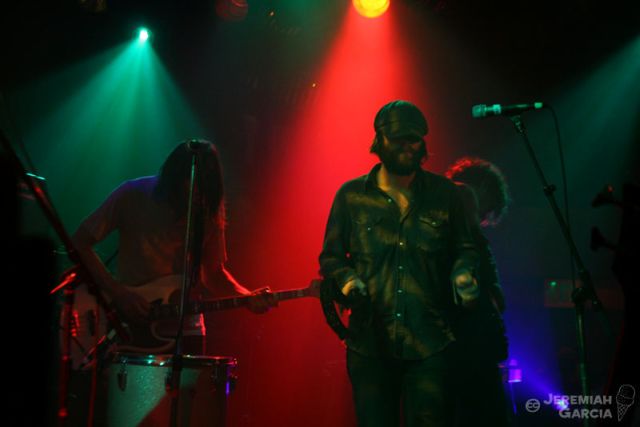 The Black Angels area a very serious rock band. They play serious music, they don't smile on stage and they for damn sure do not look like they are having a good time. It's not that they seem bored on stage, it's that they — either intentionally or unintentionally — exude cool. It drips from their pulsating rhythms, from their drawn out songs, from their I-Don't-Give-A-Fuck-What-You-Think, I'm-Just-Here-To-Play-'Cause-I-Love-Music look. They aren't the best musicians, they don't put on the greatest show in music but without a doubt, the Black Angels are the coolest band in music today.

Their long faces cast a shadowy, rectangular glow Thursday night at the Troubadour, a return to the main stage after first headlining a show there in 2007, which was just two years after they formed in Austin.

They toured in 2007 on the back of their debut release, "Passover," a haunting, 59-minute homage to psychedelic rock. The album was met with better than average reviews, but the show in June 2007 lacked the power hinted at on the album. They seemed reserved and tepid. Perhaps it was their limited catalog or the fact that, two years earlier, they were just dreaming of headlining shows and did not yet know how to pull off being the reason people paid $10 to see you.

Enter 2008 and Thursday night's show and 11 new songs from this year's superb "Directions to See a Ghost." Gone, Thursday night, was any hesitation or identity crisis.

His voice soared high above the fray, as the sold-out throng swayed like a blob of stoned birds floating above the Grand Canyon, an apt metaphor considering that the Angels borrow so heavily from their drug addled heroes, the Velvet Underground. Their name, for one, is taken from the Velvet Underground song, "Black Angel Death Song," and their songs tend to meander, if in a tightly controlled way, a la "What Goes On".

During the entirety of the 90-minute show, flashes of Americana streamed down from the Troubadour's balcony to the Andre the Giant sized canvas behind the stage. I think the canvas is a relatively new development for the Troub. Some bands have had success utilizing the imagery as a sort of 10th fielder on a baseball diamond, as in, the art obviously wasn't part of the band but you knew it had some role and you viewed it as integral to the band's objective.

Others have wasted the chance to show off their creativity, such as when Clap Your Hands Say Yeah decided the best use of a canvas was to glorify an ant farm for 90 minutes of a show that was already maddeningly mediocre.

So, Thursday, the Angels pulled off the imagery with mixed results. They reinforced the fact they their music was born in the 1950's and 1960's, but the message was unclear. Shots of John F. Kennedy appeared one second, then a glimpse of Fidel Castro seemingly after he defeated the US-backed government and a slow motion of the nuclear bomb test next. was it optimistic or pessimistic? Was it a metaphor for how fucked up our government was (and a reminder of how bad things are, by extension)? Was it a message that we never truly live in peace so get over it, chill out and listen to music?

I don't know, and maybe that's the point. We hear music, we listen to music and some of us understand what is being said and some of us don't and that is OK, given the fact that we like the collection of notes.

The Angeles spent the better part of the show moving purposefully through each of their two albums. The crowd lapped up "Passover" hits "Manipulation," "Black Grease" and "Empire," normally a nearly 6-minute ditty turned into what seemed like a 12-minute marathon. Near the end of the song -- and the first set -- Bailey fell off her stool. She continued to drum, reaching for her set with one hand as she made her back up to the kit, drumming standing up. She was exhausted, sweaty and never broke her cool.

After more than 60 minutes of debased, glorified rockery, the Angels returned for an encore that completed the circle of classic rock dedication. There is a lull in "Bloodhounds on my Trail," from "Passover," where Maas calls his team back together with a "1-2-3!" On the album it's soft and less than motivating, but live, it's a call to action and you immediately become a willing follower in his tribe. On Thursday, Maas replaced his numeric time stamp with a "Now you're gonna die," from Cash's "A Boy Named Sue."

Hunt smiled. Maas did not. The show went on.