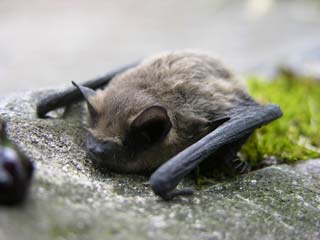 On any given day, Griffith Park is lively and brimming with joggers, cyclists, hikers, children, birthday parties, and ponies. But at night, the park is eerily silent and forbidding, lit only by a few sparse street lamps, some distant light pollution from the human urbanity that surrounds the park, and the occasional pair of glowing coyote eyes. In the darkness, the still-standing ruins of the Old Zoo look formidable, intensifying the stoic stillness. The after-hours of Griffith Park would be utterly lonesome except for the flocks of curious moths that graze the skin and the fairy-like darting of bats in the trees in search of food.

Volunteers clumsily holding rectangular bat-recording devices recalled ghost-trapping scenes from Ghost Busters as they raised the sensitive audio recording equipment into the air trying to capture bat vocalizations. Remington explained to the volunteers that AnaBat machines pick up the vocalizations of bats that are generally too high-pitched to be heard by human ears, but AnaBat devices amplify bat sounds so that people can hear their characteristic clicking and swooshing. In addition to enhancing and amplifying bat vocalizations, the AnaBat machines simultaneously record the sounds. To determine which bat species can be found in Griffith Park, Remington used the AnaBat recordings collected by the BioBlitz volunteers. Because she knows the specific vocalizations that bats make, she was able to specifically identify which bats were in Griffith Park on May 30th during the BioBlitz.

After taking the AnaBat devices back to her lab, Remington concluded that there were four bat species in the park including tiny western pipistrelle bats (Parastrellus Hesperus) which weigh only slightly more than a single penny; Mexican free-tailed bats (Tadarida brasiliensis Mexicana) which exist in such huge numbers that they are essential for the control of insect populations worldwide; hoary bats (Lasiuris cinereus) which are huge, very visible bats with an 18-inch wingspan; and surprisingly, western red bats (Lasiuris blossevillii), which are close to endangerment. The particular western red bat recorded during the BioBlitz was the first to ever be recorded in Griffith Park's history.

Photo of a bat by Lee Carson via Flickr.