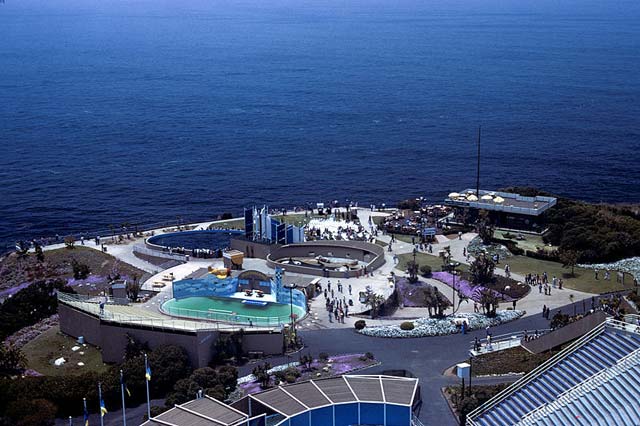 Photo by Gary B. Edstrom via Wikipedia
LAistory is our new series that will take us on a journey to what came before to help us understand where we are today. We began with Val Verde, the "Black Palm Springs", then journeyed to Thelma Todd's Roadside Cafe, then to a house in Beverly Hills and then to Echo Park's Bonnie Brae House. Now we're off to Palos Verdes to a water park closed for twenty-one years and the strange wonder that closing made necessary...

UPDATE: Reader Whinemaker has disabused me of the urban legend of flying whales. He even quoted a NY Times article: "Orky and Corky were trucked to Sea World without warning one night, ostensibly for breeding." I guess sometimes the urban legend is stronger than the need to run it through the NYTimes archives! It lead me to wonder, where would such a story come from? The ending of Marineland was so awful and heartless and corporate — companies taking wonder from the world, destroying our childhoods. Maybe we just wanted a fairytale to comfort us as we looked out on a whale-less night.

The Park
Once upon a time, some people really liked creatures from the sea. The people decided that these creatures lived too far away and that it would be nicer if they lived nearby, where they could all visit each other whenever they wanted. These people decided built Marineland of the Pacific on a cliff overlooking the sea in Palos Verdes, CA. It was a picturesque location, whose cove-ridden coastline once gave shelter to Spanish and Portuguese sailing ships — pirates and whalers mostly.

When Marineland opened its doors in 1954. At that time, it was the largest Oceanarium in the world. Its exhibits housed animals from all over the world, changing on a semi-weekly basis. Everything from dolphins to walruses to sea otters had homes there. It pioneered a swim through aquarium called the Baja Reef. 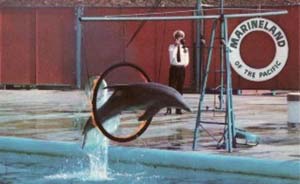 The Closing
Almost as noteworthy as its existence was the way that Marineland closed. In 1986, it was purchased by Harcourt, Brace, Jovanovich, who also owned Sea World. At the time of the sale, papers were full of promises that the park would not be closed, nor would any of its occupants be moved. However, in January of 1987, employees showed up for work to find Marineland gated and padlocked. HBJ released a statement claiming that the location was unstable -- the park was falling off of the palisade and had to be closed for the sake of both animals and workers. Now, websites that mention the incident say that HBJ closed the park only because it was financially expedient to do so. The animals were transferred to other parks, or simply released with no knowledge of how to survive in the wild.

In the mid-nineties, there was some talk of building a resort on the Marineland site, though that seems to have faded. Like so many landmarks from mid-century Los Angeles, Marineland exists in limbo -- closed to the public, it is used for filming, most recently, it has appeared in Fear Factor.

Marineland still holds a firm place in the hearts of many as the first place they saw a manta ray or an anemone . In 2003, the Marineland of the Pacific Historical Society was founded to preserve its memory. The last remaining buildings on the site were demolished in 2006.

The Orcas
Corky, was captured near British Columbia in 1969 when she was approximately 5 years old. She was placed in a circular pool with another orca, Orky, a male captured the year before. In 1977, Corky became the first orca to give birth in captivity, though the calf was stillborn. She gave birth 6 more times, but the longest any of the calves lived was forty-seven days.

In January of 1987, the whales were moved to Sea World, where they were immersed with the many whales there, who live in a series of large pools. Corky, pregnant at the time, bore her last calf a few months later, stillborn. Within the year, Orky, her companion of seventeen years, (longer than most celebrity marriages) was dead.

Now, Corky is approximately forty years old, and partially blind in one eye (though essentially healthy and about halfway through the natural orca lifespan.) She performs at Sea World daily, under the Sea World brand name, Shamu.

The Flight
They don't move Orcas in tanker trucks or strange contraptions built with nets at sea. They airlift them in hammocks, the ends of which are held by helicopters. Obviously, they have to be massively sedated to do this. They can only be moved at night so that the whales don't get dehydrated. It might be difficult to make out from the ground, but it interferes with reception -- antennae, the occasional satellite dish. (Few people had mobile phones in 1987.) And of course, it's pretty dangerous.

Imagine what they thought, sedated, drifting, thoughts coming in waves, one over the other. Did they think they were swimming? If they were, the water felt curiously... thin, and the surface, instead of mirroring their own faces back at them, swam with tiny specs of light. And all around... this strange whirring noise, a chugging sound so heavy and physical, it almost seemed as though it would hit them, instead of just brushing by.

There's a whole scene in The Hitchhiker's Guide to the Galaxy where a bomb turns into a whale that thinks it's flying for a brief moment before hitting the ground. That whale wasn't even traveling over part of one of the most populous areas in North America. What a spectacle it must have been. These great beasts gliding through the night, for a moment freed from the normal constraints of breeding and performing. For once able to swim among the stars instead of just below them.