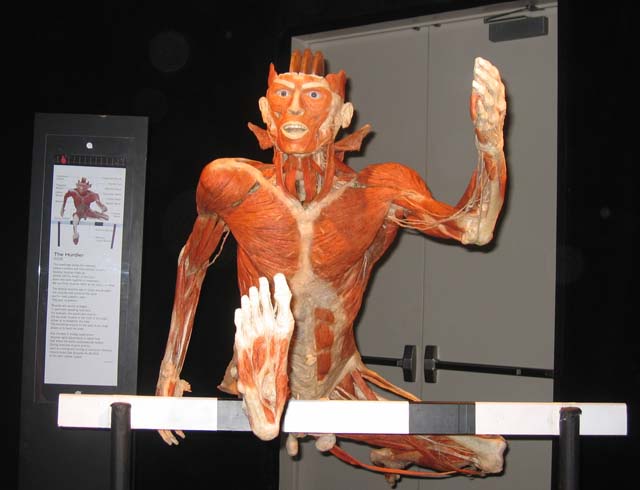 It has long been held that the mysteries of the human body be revealed to a select group of degree laden individuals, physicians and scientists alike, whose rigorous scholastic upbringing served as an all access pass to our anatomy and physiology. The layperson, meanwhile, was left to entrust his or her precious and vastly complicated system to the aforementioned guru or, more often then not, lay awake at night worrying about that enigmatic pain that just won’t go away. But with the advent of reality TV and the sequencing of the human genome, the disparity between those who know and those who don’t is slowly going the way of bloodletting and elecrtroshock therapy. At the forefront of the movement to reveal the machine behind the curtain is Body Worlds' inventor Dr. Gunther von Hagens, whose patented process of Plastination has allowed the human (and equine) body to be preserved in a state of undress.

By utilizing donations made by the public, von Hagens and his team have constructed museum exhibitions displaying the muscles, tendons, blood vessels and organ tissues of women and men in various poses (gymnastic and otherwise) in a paradoxical presentation of fixed movement. For over three decades, von Hagens has sought to continually refine the process, eventually founding the Institute for Plastination (IfP) in 1993 as a means of “improving overall anatomical instruction,” “improving awareness of medical issues, particularly among the general public” and “popularizing and developing plastination techniques.”

To further the aim of public awareness, von Hagens will be speaking at Santa Monica College on June 6 to discuss "Human Anatomy: From Mummies to Plastination" as a companion piece to the current Body Worlds exhibition, Body Worlds 3 & the Story of the Heart (previously covered here by Christine N. Ziemba for LAist) running until September 7, 2008 at the California Science Center. The talk is free and open to the public, but space is limited and open on a first-come, first-served basis.