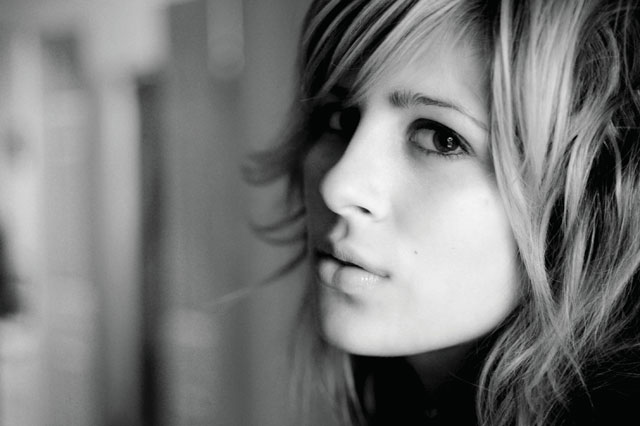 When you see singer-songwriter Jessie Baylin perform, there's something familiar about her. Sure, it could be the fact that her posters now grace the bulletin boards of many local Starbucks, or it might be because she's been a regular at local venues such as the Hotel Cafe and the Mint. Then again, maybe it's just the fact that Baylin seems to be an old soul. Though still in her early 20s, she's already so at ease on the stage that she'll throw off her shoes to give a barefoot performance, or mix things up with a rousing cover of "Rocky Raccoon." You never know what to expect, and her smoky, welcoming voice usually holds some surprises in store.

LAist was fortunate enough to sit down with her between sets of the Hotel Cafe Tour. And it was just in time, because with a new tour including a gig at the Roxy this Friday and her first major record label release next month, things aren't going to slow down anytime soon for Baylin.

LAist: Your new record, Firesight, will be released on June 24. That's a great name for an album. Can you tell me the story behind it?

Jessie Baylin: Many years ago, my grandparents came over from Italy and opened a restaurant. My dad lived above it when he grew up, and he later inherited it, and I lived there for the first three years of my life. It was a jazz bar as well and it was called "Linda's Fire Site Inn." I just feel like the name represents me, my past, where I came from and where my sensibilities are rooted—in the culture of being at the Fire Site Inn with the people, the food and a lot of passion.

Do your parents still own the cafe?

We sold it when I was three, but my dad bought another restaurant called the Stirling Hotel. That was his baby and I spent a good portion of my life growing up there. It was a really dirty bar and now it's an unbelievable restaurant in New Jersey. It's like an old saloon.

What's amazing about it is that we came from nothing. My parents' determination was amazing. They had a vision and they never let go of it. 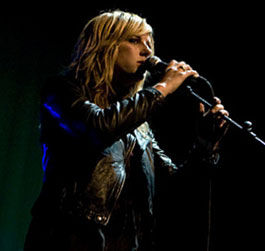 Have you returned to New Jersey to do any concerts for your friends and family?

Well, we're on a commuter line so we lost a lot of people in 9/11. It was really hard on our town and county. We were hit pretty hard. A lot of the United flight attendants lived in the area as well, so for five years we did a benefit for the flight attendants whose plane went down in Pennsylvania. We had Springsteen and Bon Jovi send stuff and we had an auction, and Conan O'Brien's band and a bunch of people from the E Street Band played. I sat in and sang "Stuck in the Middle with You."

We have a big grove, so I want to do something with a bunch of people from the Hotel Cafe Tour someday. The neighbors might complain, but it would be a lot of great music.

Is it true you're going to perform at Bonnaroo?

Yes. I can't believe it. I'm so excited. Now, I'm not one of those people who sit down and write a list of the top five things I want this year, but I consciously created a mental list for that one. I said to myself, "If I don't get to go, I'm going to be so disappointed." But I got in!

Who are you most excited to see there?

Robert Plant and Alison Krauss. If I can get a picture with Robert Plant I will be so happy. 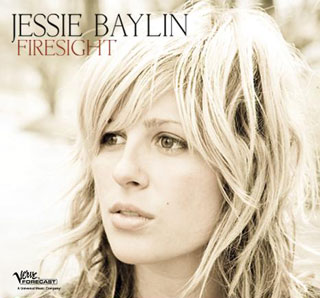 Getting back to the album, what is your songwriting process?

For me the lyric usually comes first. I just think there's so much melody in just a sentence. So if I just sing what that line feels like, for me it just comes out.

It depends on the song, though. "See How I Run" was given to me as a track. I sang the melody over it and that one happened so magically. I immediately came up with the lyrics in my head—every single word. It just fit and I thought, "This is bizarre!"

Jessie Baylin - "See How I Run"

Speaking of lyrics, does your new song “The Glitter” have anything to do with your experiences when you first moved to Los Angeles?

Yes. I was totally beaten down by the business. I think everybody has that moment. There was just this day when everything felt different and I thought to myself, "I get what's going on. My eyes are finally open. No more stars anymore."

What was it like working with some of the best talent in Nashville on your album?

It was amazing. And I pretty much have every guitar player in Nashville on the record. (laughs) It's hilarious. In the liner notes where it says "guitar by," there's a giant paragraph. It was intense.

What's your favorite memory from the Hotel Cafe Tour?

There are so many, but I would probably say last night when I stayed up until 5 a.m. with Cary Brothers. He really is my brother. It's unbelievable how connected I feel when I'm talking to him. Just grounded and centered. He brings a good side out of me.

I love that when you're on tour, you eat together, you talk about everything, and you get really deep with these people. For instance, within one day, Jesca Hoop went from a complete stranger to my new best friend. I love her.

How does this kind of a tour impact you as an artist?

It's pushed me to go further and write more. It makes me step up my game, for sure. You have to, because everybody else is so good. I mean, no one's really comparing themselves to each other, but you hear things and think, "That was good. I've gotta do something now." I love that.

I like getting uncomfortable and pushing myself. If I could make a bumper sticker it would say "Get Uncomfortable."

What's the first thing you wanted to do when you got back to LA?

Well, my favorite stuff always involves food. Osteria Mozza is great. And I always go to the Aroma Cafe. That's my place in the Valley. It's like being on vacation.

What would we find you doing on a day off?

I like to golf. Now this is going to sound bad, but for me, this being my first time playing my own ball, I scored a 57 on the front 9. I'm no Tiger Woods, but I love it. It's such a focused game and I can't think about anything else when I'm playing. It's a great way to step outside of your mind a bit. It's working a completely different part of your mind, and I like that feeling. 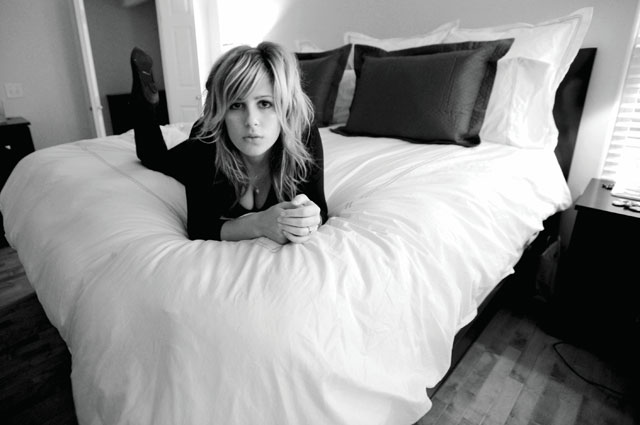 What program do you use to make your video blogs? How did you learn how to do that?

Jim Bianco showed me how to do some stuff. I just do them on iMovie and for the most part, I have no idea what I'm doing. I need a complete tutorial because I have all these great ideas, but I don't know how to do them yet.

You've been fortunate to make a lot of talented friends in Hollywood. What's the best advice you received as you were just starting out in the LA music scene?

My friend John Mayer once told me, "Just write. Write as much as you possibly can. All the time."

Also, John knows I love Stevie Nicks, and one day when he knew he was going to see her, he bought a Moleskine for her to sign. He told her, "I know this girl who loves you and I really feel like you're going to inspire her if you sign this. She'll fill it up."

He then sent it to me with a note that said, "To help you on your way…" I opened it up and it said, "With love, Stevie."

The day I received the signed Moleskine, I wrote "The Glitter." I was driving and had to pull over to the side of the road because the song was suddenly there in my head. 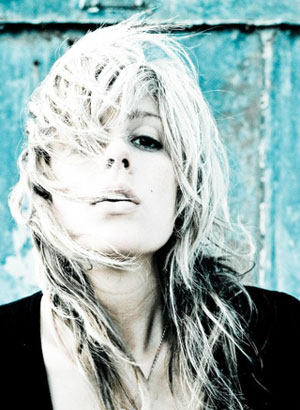 What's next for you now that the Hotel Cafe Tour is coming to an end?

I have three days off during which I'm going to stay uncomfortable and write amidst my wrinkled clothes. Then I have to go on tour again. I start with Newton Faulkner and Teitur, and I have to shoot a video, but I'm on tour pretty consistently.

I'm the luckiest girl ever. I tour with the best people. I'm truly enjoying myself. I watch everyone's show every night. I can't help it. I love music and I love watching people perform.

What's your favorite song of yours to perform?

Right now it's "I'll Cry for the Both of Us." I really like that song because I feel like it's real. People can connect to it easily. Plus I'd never written about something like that before.

What difference have your fans (many of whom call themselves "Sparrows") made in your career thus far?

It's been amazing. I can tour anywhere and I have multiple people ready to help me and sell merchandise. I'd be nothing without them. Before this, I had no promotion at all. It's just been total word of mouth.

What's been one of the most surreal parts of the last year or so?

One surreal moment was when my brother heard a song of mine playing on Hear Music (XM Radio) while he was at Starbucks. He called me and asked, "Are you playing at Starbucks? Cause your name's on the wall."

Now that you live in Nashville, what do you miss most about LA?

Just being in a big city where it doesn't feel small. You can get lost sometimes. I'm making myself bicoastal. I've decided. Today. Which is just what my fiancé [Nathan Followill of Kings of Leon] was worried about. (laughs) I just love it here so much.

Jessie Baylin will be opening for Teitur at the Roxy this Friday, May 23, at 8 p.m. Visit this link to purchase tickets.

Firesight will be released June 23 and is available for pre-order through Amazon.com and other music retailers. In addition, Baylin's "Ember EP," featuring three songs from the new album, is now available for download on iTunes.