LAistory: All That's Left is the Story

LAistory is our new series that will take us on a journey to what came before to help us understand where we are today. We began with Val Verde, the "Black Palm Springs", then journeyed to Thelma Todd's Roadside Cafe, and now we're looking at where a house once stood in Beverly Hills... 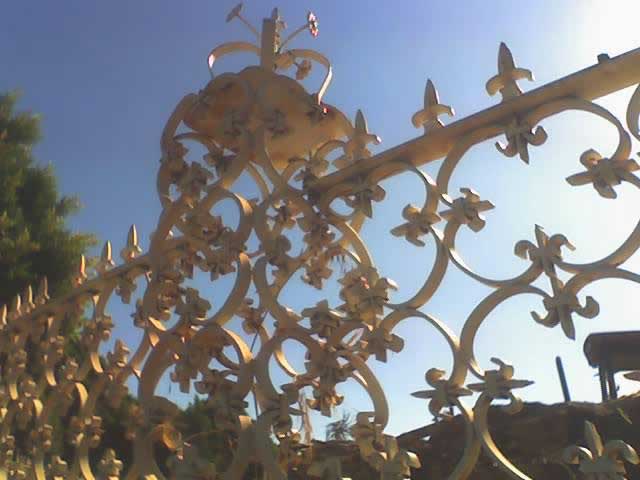 The piece of property at 9755 Sunset Boulevard in Beverly Hills sat empty for a good twenty years. I have some vague memory of a pale green house boarded up for years before it was condemned and destroyed.

At one time, the house was a massive Italian villa, sitting on a fairly sizable piece of property, as is common on the north side of Sunset Boulevard before Beverly Hills turns into West Hollywood just after North Sierra Drive (you can tell when the buttery smooth pavement of BH hits the ruts and potholes of West Hollywood — the sound of money vanishing.)

At some point, it was bought by a newly married Arabian couple. They commissioned a number of area artisans to do a huge amount of elaborate and costly work — gold plated fixtures were to be put into the bathrooms, along with a huge amount of tile work, expensive marbles and an outer wall made of river stone.

There were a number of statues on the property — nudes — which were painted in true to life hues, causing quite a scandal. The city insisted that the paint be removed.

Near the end of the construction, they threw a huge party and everyone in Beverly Hills was invited, including everyone who had worked on the house. Afterward, one of the dads of the couple came and whisked them back to Saudi Arabia. The debts for the work that the had done on the house were never paid. 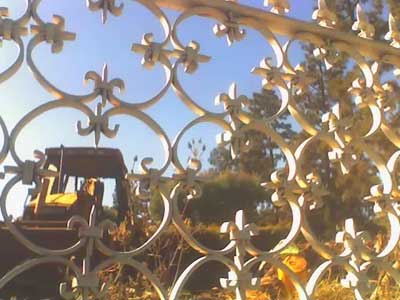 After a few years, a psychiatrist decided that the art that was up in the house should be "saved." He gathered some guys together and they robbed the house. They couldn't get it all, so they had to go back. This time the police were ready for them. But the burglars set the house on fire, creating the distraction that allowed them to escape. (They were eventually caught.)

The house was demolished. There were plans to build an apartment building, but financing never came through. The property sat, vacant and overgrown, green with grass in the spring until it turned yellow in the summer, surrounded by an ornate fence. The river stones were scavenged until the wall was no more. They even took some of the spikes off the iron work of the fence. When I took these pictures in 2005, there were tractors and permits up, piles of dirt everywhere.

In New Orleans, it's never surprising to find a dilapidated house, a vacant lot in the middle of the nicest neighborhoods, but in Beverly Hills it was always as though it would be in bad taste to mar the smooth lawns, empty sidewalks and perfect (in some cases, perfectly ugly) houses. So the site at 9755 Sunset Boulevard always drew attention. These days, a new house has been built, less scandalous, I'm sure the neighbors like it better, but also less interesting.

Photos by Jacy for LAist