LAist Guide to the Primary: Proposition 98 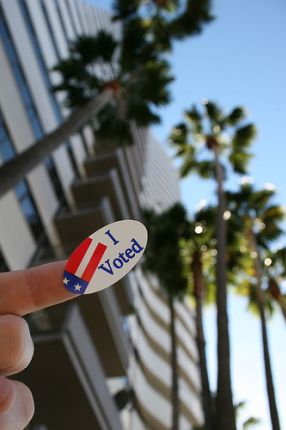 You won't be faulted if you feel as if it just now seems we are getting out from under the covers of the Feb. 5 Primary. For one, there was very little finality — something that elections are supposed to deliver — when we were promised Super Tuesday would end all lingering doubts about our preferred candidate. For another, election officials are just now getting around to changing the flawed ballots that left so many crying Bubble Trouble last time around.

But, here we are, mere weeks from the June 3 primary where two important ballot propositions command our attention and understanding, even if the judicial races are pointless and potentially harmful.

Both Propositions 98 and 99 deal with the plucky issue of eminent domain, a social contract that gives the government authority to take property under very specific circumstances. If passed, both would curb the government's ability to take land that they might have previously claimed the right to based on public interest. Inherently stark differences, however, mark both proposition's divide and could ultimately doom one over another.

For this week, though, we will concentrate on Proposition 98

What does it say:

As mentioned, Prop 98 would bar state and local governments from taking or damaging private property for private uses if passed. But it would also phase out rent control, a fiscal safety net for thousands of renters around the city, the likes of whom pay $600 a month for a one bedroom in Venice that might cost three times that today.

What happens if you vote Yes:

The government would not have the same authority it does today to take homes, small businesses, farms and places of worship for their own or another private developers' purview; Rent control would be phased out.

Wait, seriously? I would not be protected by rent control anymore if this crap passes:

Yes and no. More than a 100 cities and counties around the state have some form of rent control law that affects about one million California apartment and mobile home dwellers. If passed, local governments would not be able to enact new rent control measures and controlled rents in place would be phased out when the resident moves. Hold on there cowboy, if you currently live in a $600 Venice pad you secured from some sweet deal you got in 1992, your rent won't be phased out. But new renters would be charged a market rate for apartments (and mobile homes, if thats your thing), as they are now, and would be subject to yearly increases.

Detractors of the measure, including the League of Women Voters and the AARP and have launched attacks opposing 98, saying:

So, why would anyone vote for this measure? Supporters of the proposition, who include the Howard Jarvis Taxpayers Assn. and small business owners, say that passing 98 will actually help renters by securing the places in which they live.

The government has no right to take your property to use it for private use and assage of 98 is vital to ensure no more seizures take place, or so they say,

Is eminent domain really a problem? I mean, shit, what if we need a new schools and a liquor stands in the way of the county and Johnny learning his ABCs?

Prop. 98 would not affect government acquisition of private property for public use. Schools, fire stations, highways, etc. are still fair game. But let's say this is 1949 and the city wants your Echo Park home to build Dodger Stadium. If 98 was law, they would not be allowed to do that, which might have been a good thing for residents there, who were promised the moon and barely got a star.


The residents were told that they would have first choice for these new homes, which included two dozen 13-story buildings and more than 160 two-story bunkers, in addition to newly rebuilt playgrounds and schools. Some residents resisted the orders to move and were soon labeled “squatters,” while others felt they had no choice and relocated. Most received insubstantial or no compensation for their homes and property. [PBS]


Due to the changing political climate, many associated living assistance programs and social welfare akin to Communism. Developments were not built and all we today is a team that hasn't won a playoff series since Kirk Gibson, with two bad legs, helped the Dodgers in 1988 to a championship.

If this passes, how much would it dent my taxpaying wallet?

It's hard to say. If rent control is abolished, and seniors or other low income renters are thrown out on their asses, the government cold be forced to build more subsidized housing and/or provide rental assistance, which could cost taxpayers money.

What do you think?

Photo of vote sticker by atomicshakespeares, via LAist Featured Photos Pool on Flickr.