Yes, You Can Take Photos on the Metro Red Line 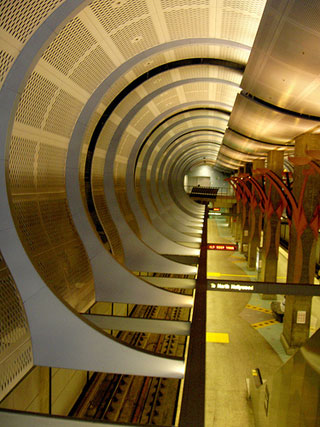 Earlier this afternoon, boingboing highlighted an incident that occurred involving Keith Garsee last night at a Metro Red Line station. He was taking photos when he was stopped by a Metro employee: "Hey! It's against the 9-11 Law to take pictures down here man!"

It led to a little back and forth, then the loudspeaker came on: "Attention to the gentleman in the plaid shirt: You are not allowed to take photographs in the Subway. You will be arrested if you continue to take photos and harrass the metro worker."

The photo-snapping Metro rider was then beckoned to a call box to speak with a Sheriff's Deputy over the phone: "You can't take pictures sir, we don't know why you are taking pictures."

But Commander Dan Finkelstein, Chief of Transit Police for Metro, told LAist over the phone that there is no such law against photography. "Since 9/11, many of the large transit agencies have grappled with that. What we have our deputies do is if someone is acting suspicious, regardless of photography, the deputy will make contact."

While Finkelstein was not yet aware of this specific incident, he explained that there are no laws affecting Metro properties regarding personal photography and that being questioned by police is routine, something no more or less than being pulled over for having your tail light out.

It seems that this incident was a fluke — let's hope it is the last one too.

Related: In New York City, a Columbia Grad student sued the NYPD over this issue.

Photo by Tales of an LA Addict via LAist Featured Photos