Why Do We Vote for Judges? 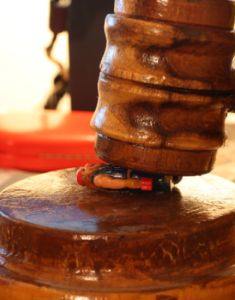 All over Los Angeles, on chain link fences and freeway underpasses, sprawling banners and rectangular placards advertise names of people running for office you might have never heard and with whom you will probably never have any contact.

But these ghosts of democracy, running for Los Angeles Superior Court judicial posts, could affect our jail and court systems for years to come.

This June 3, voters in California will be asked to decide on two very important ballot measures and to vote for a multitude of lawyers and incumbent judges vying for office. In L.A., 11 judicial races with 30 contenders will fill up air time and compete for attention.

But, as our prison population continues to balloon at a steep price to voters everywhere, why do we continue to vote for those who help ship so many to jail?

Why do we vote for judges?

According to VoteForJudges.com, "it is our responsibility to vote for judges we can trust to make impartial decisions based on fair consideration of the facts and law."

Judges, they say, rule on a variety of issues that can affect us personally (child custody, for example) and in ways that we can't immediately appreciate, such as rulings that might have farther reaching effects.

"We never know when a judge we vote for today will make a decision that will affect your life and the lives of your family and friends," their website states.

None of that is revelatory or surprising. In short, judges are asked to be judges. They are asked to do their job and we must vote the best ones in to ensure that the best person is deciding on what's best for us, or so the theory goes.

We do that for politicians of all sorts, including school board members, local, state and federal officials and for fiscal measures.

But in voting for judges, we might be perpetuating a societal ill that could have long lasting harmful affects for citizens and the world.

Judges, beholden to elections and hoping to avoid the perils of negative campaign attacks, seek out ways to toughen their stances on crime by sending offenders to jails and prisons that have skyrocketed our state and federal incarceration rates and further plunged state and federal governments into debt. 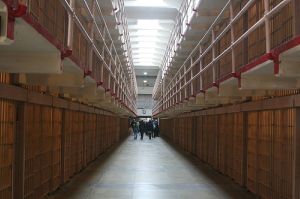 The numbers are staggering:

There are 135 jails in California, according to the National Institute of Corrections and the state has a higher incarceration rate and lower probation rate than the national average.

In February, the Pew Center on the States released a study that found more than one in 100 adults in the United States is in jail or prison, an all-time high that is costing state governments nearly $50 billion a year -- up from $11 billion 20 years before -- and the federal government $5 billion more.

With more than 2.3 million people behind bars, the United States leads the world in both the number and percentage of residents it incarcerates, leaving far-more-populous China a distant second, the Washington Post reported.

Logic would leave one to believe that jailing people makes society safer by removing dangerous elements from the streets and molding them into good citizens. But the Pew report found that the national recidivism rate remains virtually unchanged, with about half of released inmates returning to jail or prison within three years.

They may be removed, but they are not getting better, begging the question: What's the point and can we really afford to increase a state corrections budget (which last year totaled $10.1 billion) even as California is mired in a $10 billion budget gap?

It would be too easy to blame judges for our bloated prison population. There are educational and societal factors that help explain why so many people, particularly African-Americans, are sent to prison. But an easy solution to helping ebb the flow of .01 percent of our population into jails is to stop voting for judges and allow them to rule without fear of electoral persecution.

Allow them to be appointed for certain amounts of time and hold them up for review by other judges every so often. It is needless and perhaps harmful to hold judges up for electoral review by voters who are tricked into believing tough on crime means safer streets.

Photo of gavel by Brymo and Alcatraz by pipeddream, via Flickr.