'In a city ruled by cars, why is it that you can get places faster on bikes?' 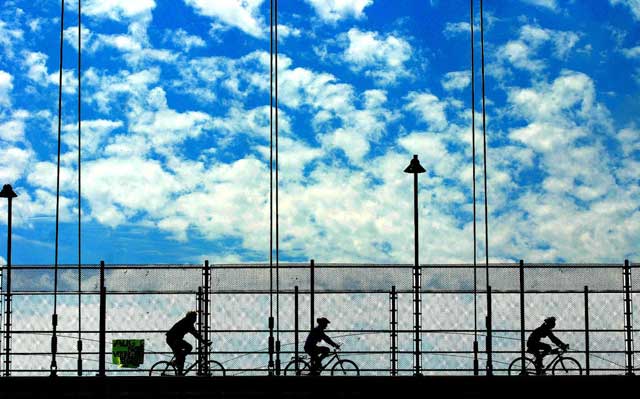 Last Friday, Crimanimal Mass took their second bicycle ride on the freeway during drive-home rush hour. Whizzing by gridlocked cars, the demonstration, albeit illegal, raises questions. Good questions. One of the group's organizers, Morgan Strauss, 29, was quoted in the Santa Monica Daily Press (.pdf) this weekend saying that he “just wanted to raise questions about the transportation infrastructure. In a city ruled by cars, why is it that you can get places faster on bikes?”

Call it unintended consequences, or just dead-poor planning, Los Angeles and its region is one messy traffic jam. And just as disheveled is bicycle planning and, perhaps, proper respect. This is a place where a bicycle ride between Los Angeles and Santa Monica down Santa Monica Blvd. on the sidewalk is perfectly legal in one city, but not the other; where more often that not, a conflict between a motorist and a cyclist results in the latter being subjected to a ticket or even being detained in handcuffs; and where law enforcement's training on cyclists' legal rights can be lacking.

But things are not as bad as it seems. Bicycle advocacy proceeds and positive improvements are being made with more bicycle racks and the Cyclists' Bill of Rights. Even if Crimanimal Mass has no official capacity, it's definitely sends a powerful and visual message to the power that be.

Today also marks the first day of Bike To Work Week with a 9:30 a.m. kick-off event at the Universal Metro Station. On Thursday, the official Bike to Work Day, bicycle riders can ride for free on Metro and various other transit agency buses.