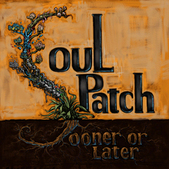 Sooner or Later is Soul Patch's sophomore effort following a long break from their first album, Summers In Rangoon, released in 2001. Soul Patch is a quartet collective with its primary membership split between Boulder, CO and the SF Bay Area - on Sooner or Later, several guest musicans are on board, including LA-based session keyboardist, Kevin McCourt, who has toured with everyone from Chuck Berry to Stevie Wonder.

This album is an eclectic collection of tunes that vary intensity from soothing and celebratory to hard prog rock ("Burnin'") that reminded me of certain King Crimson albums. One thing is sure, all of the songs are full of blues-inflected licks and engaging pop melodies. There is a jam band element to Soul Patch, with the expected chord changes, syncopation, and solo interludes exemplified in excellent guitar work by Ryan McIntyre. Where the band excels most is in the style found on "Greyboy" (listen above), a kind of urban jazz sound that reminded me of the Brand New Heavies - it's a place where drummer Jason Mendelson's rhythms, McIntyre's guitar, and McCourt's perfect keyboards all come together with perfect balance.

Not to say that Soul Patch operates within any defined schema, but if you are a fan of moe., or The Samples, or Train, then you will definitely find Sooner or Later appealing. This is good stuff, 7 years is too long a break between albums.