Although Los Angeles is by most standards a young city, it is a city full of history, regardless. In LAist's past we've looked at the mysterious Spider Pool ruins, the life of James M. Wood, and Campo de Cahuenga, but have barely scratched the surface. Today we're introducing a new feature on the site, LAistory, which will take us on a journey to what came before to help us understand where we are today.

We begin in a northern corner of LA County, in a small town tucked in the Santa Clarita Valley called Val Verde. Here rests a piece of history that is often left unmentioned or obscured because it reflects a time when equality was not a reality, and when segregation made way for separation out of necessity...and was celebrated.

Once a Mexican mining town, Val Verde ("green valley") was opened up to LA's African-American population in the early 1900s by "a wealthy white woman in Pasadena" who was angered by the city's Jim Crow laws, and the area soon "became a 'weekend picnic spot' for Afro-Angelenos" (Flamming 348).

In 1924 the land was purchased by Sidney Dones, who partnered with Joe Bass on the project. The pair shared a vision for the area as a resort community for African-Americans who were not permitted to own land or gather for recreation elsewhere in the city. They marketed their town as "Eureka Villa" and began to sell parcels to interested parties. "In 1928 the development became an independent township and residents changed the name back to Val Verde" (Flamming 348). By the 1930s the area was wildly popular, mainly because "it was one of only a few places blacks could go for recreation, others being Lake Elsinore in Riverside County, a section of Venice Beach and a park in Pasadena that was open to blacks one day a year" (Nielsen V6).

The thirties saw a whirl of activity in Val Verde because WPA funds were granted for development of a swimming pool, "funded by a federal grant of thrity-nine thousand dollars" and celebrated with a gala opening that "brought out a veritable who's who of black Los Angeles, including film stars Louise Beavers [...] and Hattie McDaniels, who was then shooting Gone With the Wind and would shortly make history by becoming the first African American to win an Oscar" (Flamming 349). The town boasted picnic tables, fields for ball playing, barbecue spots, and theatres where all-black productions and performers took to the stages. Hundreds, sometimes thousands of people would go to Val Verde, particularly in the summer months. 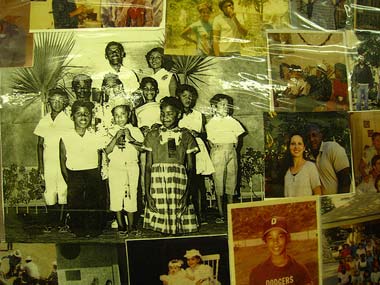 The need for a community like Val Verde touches on a time in our city's past that was, to say the least, bittersweet for a portion of the population. "The first half of [the 20th] century was a sad time for many Angelenos," recalls Leon Worden, a local historian. "Black-owned businesses were torched. Blacks couldn't use most beaches or public swimming pools, let alone compete with whites for high-paying jobs. It wasn't until the mid-1950s that the courts struck down restrictive covenants that prevented blacks from owning real estate in certain areas of Los Angeles."

While Val Verde was a respite and a safe haven, it also represented the fact that not everyone was able to fully enjoy Los Angeles as the Eden-like land of plenty as it was advertised and reputed to be. Curiously enough, many of Val Verde's most prominent supporters were those who were the strongest voices in opposition of segregation, like Charlotta Bass and other leaders of the Race organization, "who consistently denounced segregated projects but apparently viewed Val Verde as a matter of separation, not segregation" (Flamming 349).

So what became of Val Verde? By the 1960s and 1970s, segregation laws were reversed and Afro-Angelenos filtered into the city itself and made homes and lives for themselves without restriction. The need for an escape and a separate community was gone, and with it went much of the town's legacy. Soon Val Verde was seeing an influx of non-black residents, namely Hispanics, who were happy to find a quiet place to settle and raise families. The town is now home to "mostly working class Latinos, a bevy of CalArts alums and others who sought to escape the hustle-bustle of Los Angeles for their own reasons" (Worden).

There is little evidence of the resort community once hailed as the "Black Palm Springs" left in Val Verde. Elderly residents who were part of the town's hey day have passed away, or have their own memories on their walls or packed in boxes. The 1994 Northridge earthquake wreaked tremendous havoc on the town, damaging most of the original structures. In 1996 the celebrated pool was replaced with a new one, although in the same location, adjacent to the same picnic-table studded park and populated ball fields. The town's residents live in a mix of homes; some smaller ones that appear to be from the 20s and 30s are interspersed with modern stucco family dwellings equipped with satellite dishes and new cars in the driveway. The population is now 86% Latino, according to one resident, whose family was the fourth Latino family to move into town in the late 1960s.

At that time the town "entered a new phase in its history" and former hot-spots like "the nightclubs and restaurants were closed and boarded up" (Nielsen V6). The area is no longer emblematic of racial divide, but rather about what life is like for most people these days, which is making ends meet and having a safe place to raise kids. The community still uses the park as a hub, where meetings take place and celebrations, like the annual Cinco de Mayo festivities, take place. Inside the Recreation Center, one of the few original buildings left, the walls are covered with collages of photos of residents past and present in a patchwork of colors representative of Val Verde's ironically diverse history. There's one store in town, the Fast Stop #2 (#1 is in Sun Valley)--but it's the original building. In October 2003 Val Verde was in the news because a wildfire that was deliberately set raged through its hills. It is difficult to say whether Val Verde's importance rests in what it was, what it is, or what it will be.

In 1996 Santa Clarita historian Worden said he thought Val Verde was ready for its "renaissance" but it is debatable if that has, indeed, taken place. Those who call Val Verde home have a small, diverse, and close-knit community, but both its current incarnation and its origins remain unknown to most Angelenos. Worden said, twelve years ago: "Val Verde is all set to become a 'happening' place again." Only time will tell.