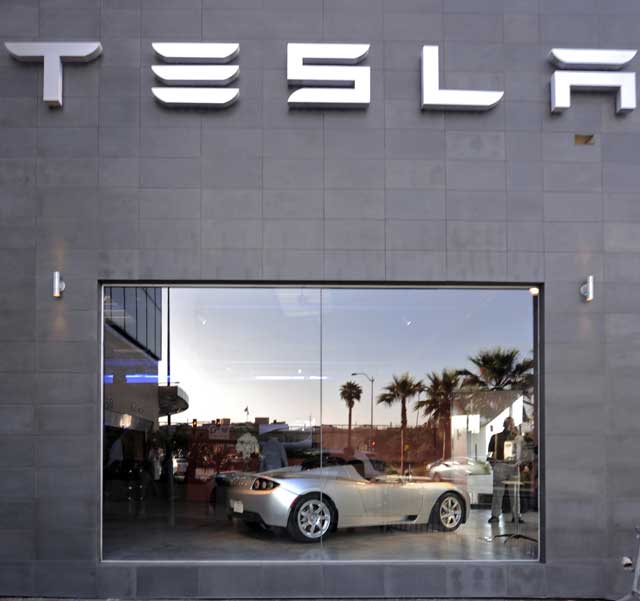 Taken yesterday, the Tesla Roadster electric car sits in a showroom during an event to celebrate the opening of the first Tesla Flagship Store near the corner of Santa Monica and Sepulveda (AP Photo/Mark J. Terrill)

Definitely one of the hottest energy-efficient green cars around, the fully electric Tesla Roadster can travel over 200 miles on a single battery charge and can go from 0 to 60 mph in a short 3.9 seconds. Lucky for Los Angeles, it gets Tesla Motor's first location for a dealership.

Unfortunately, shoppers looking to buy the $100,000 sports car will not be making any impulse buys for awhile. One, because 600 orders have already sold with a waiting list of 400 more. And two, only four production cars have actually been built. By December, they hope to have at least 300 cars finished. A development glitch in the transmission caused the slow down.

As for the store it self, AutoWeek explains: "The Tesla store looks more like a cool ad agency or hip restaurant than a car dealership. Its industrial look features poured concrete floors, exposed beams and ductwork, mirrored front glass and planter boxes filled with horsetail stems. The service department is out in the open to allow customers to see what is going on with their cars." It cost $2-million to make and the goal was to have a "nontraditional automative experience" based on the Apple Store concept for consumers.

Los Angeles won't hold onto it's only-Tesla-dealership title for long. The second store is planned to open this summer in Menlo Park, CA with a possibility of four more stores in New York, Miami, Seattle and Chicago by 2009.