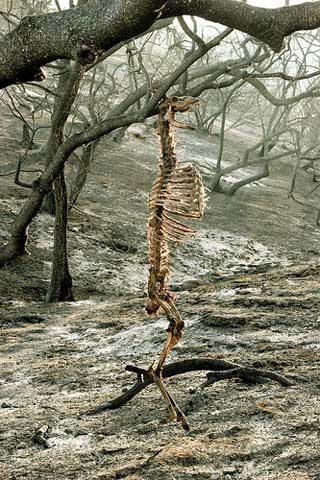 It has been almost a year since the massive Griffith Park fire. In a short time, the blaze ripped through Los Angeles' beloved outdoor space, charring 800 acres and destroying popular spots such as the bird sanctuary and Dante's View.

After the fire settled, the now 33-year-old photographer Colin Brown took a walk with his dog and photographed what he saw. The images are haunting, sad and unexpected. Beginning Saturday night, his photos will be shown in "Aftermath: The Griffith Park Fire" at the DRKRM Gallery. The exhibit runs through May 18th, but at Saturday's opening from 7 to 10 p.m., people can meet Brown and also enter a raffle that will benefit Northeast Trees, a partner in planting trees around Los Angeles and Griffith Park (prizes are Greek Amphitheater tickets). A portion of each photograph sale will also be donated to the organization.

LAist: What were you thinking as you walked around taking photos?

Colin Brown: Just a few days after the fire, I entered Griffith Park. Overhead, helicopters fluttered and on the ground lay a blanket of ash, thick and white like snow. The park was polarized by the fire — everything was either black or white. What led me to the canyon where I found the animals, aside from the awful stench, were the ravens...hundreds of ravens cawing so loudly that it sounded like a party. But it was a feast; in their beaks were tufts of fur. I saw a coyote guarding the body of her mate. When I look through my camera lens I often become detached, but the coyote made me feel like I was shooting a funeral.

I felt guilty and kept going deeper into the canyon. That was when I saw the deer, hanging by its antlers from the branch of a tree.

Brown traveled along Lower Beacon Trail. Marked above is where the hanging deer (pictured above) was found

Wasn't Griffith Park closed to the public. How did you get in?

When the fire was extinguished I didn’t see why the park shouldn’t immediately be re-opened so I took my dog for a walk. Later I learned that the fire may have been burning underground and it was a very dangerous place to be. Was I supposed to be there? No. Would I have brought my dog if I had know it was unsafe. No. Am I glad that I shot the photos I did. Yes. If I hadn’t been in the park we would not have proof of the true victims of the blaze. 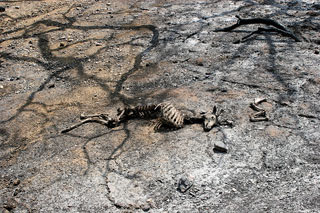 Is the park 100% open again or are there areas still closed? Have you revisited that canyon since?

I have returned to the park many times since Christmas when many of the trails re-opened. Much of Vista del Valle is still closed as is a section of the Riverside Trail that made my hike such an enjoyably perfect one hour loop. These continued closures I assume are due to fears of erosion. Ironically the park seems to have accrued the most damage at the closed trail heads. Trekkers seeking ways around the closure barriers damage the slurry of seed and mulch that has been spread across the hillsides.

For information on trail closures this seems to be the best website:
http://lagriffithpark.blogspot.com/

Also, this is an interesting animated map of the fire spreading through the park:
http://www.cartifact.com/interactive/griffithfire/

I shoot with a Canon dSLR and a pretty good lens. Digital is great for the immediacy. I love shooting, putting the images online, and getting feedback all in the same day. 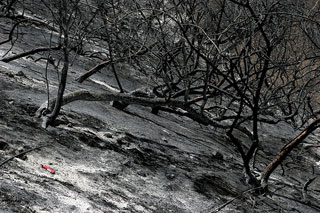 How did this show in May come about?

I posted my photos on flickr.com. Soon the photos caught the attention of a few blogs. Then THE BOOK LA, a visual arts and entertainment magazine, published a gorgeous collection of my photos. I think everyone who sees the photos is startled -- a largely unknown tragedy in the heart of Los Angeles. This is why the DRKRM GALLERY knew they had to exhibit the photos during the one-year anniversary of the
fire.

The photos naturally make us want to ask questions. Is the park recovering? Have the deer, coyotes, and other animals returned? Will Griffith Park burn again?

Thanks Colin, have a great opening on Saturday!