All West Coast Ports Closed for May Day Strike 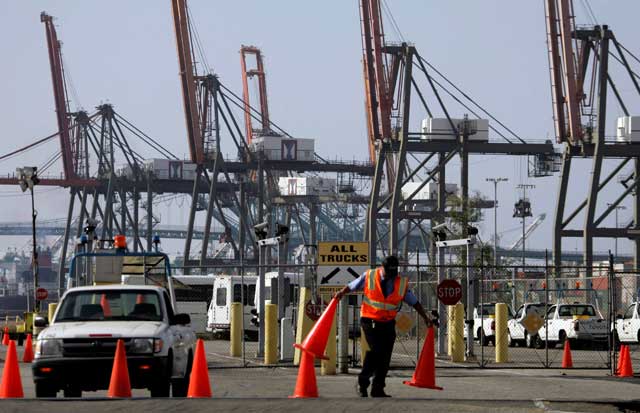 Security personnel place warning cones in front of the closed gates at the entrance to the Port of Los Angeles. West Coast cargo traffic has come to a halt as port workers stage anti-war protests to commemorate May Day. (AP Photo/Nick Ut)

In the name of ending the war, all 29 ports along the West Coast, including Los Angeles and Long Beach, have halted operations for one shift. "We are supporting the troops and telling politicians in Washington that it's time to end the war in Iraq," dockworkers' union president Bob McEllrath said in a press release.

Two years ago today, a similar protest happened when thousands of truck drivers stayed away to participate in "Day Without Immigrants." This year, the truckers are being turned away from the gates of ports until they can return later this evening when the 6:00 p.m. shift begins.

Today also "serves as a reminder of the 2002 dispute between the maritime association and the dockworkers that paralyzed West Coast ports for 10 days," noted the LA Times.