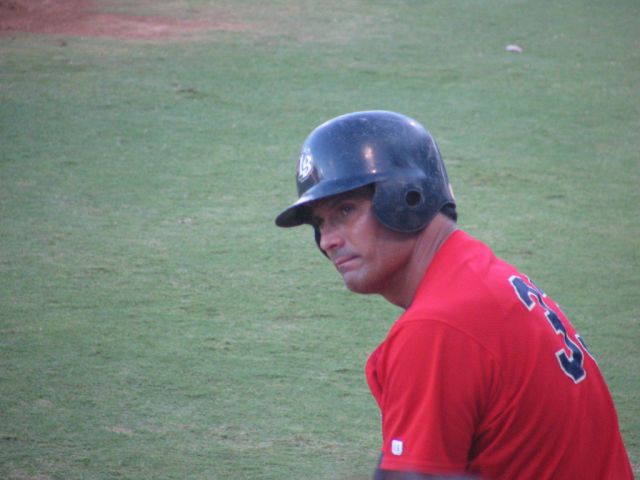 Jose Canseco's first book, Juiced: Wild Times, Rampant 'Roids, Smash Hits & How Baseball Got Big was called "the worst sports book so far in three centuries" by the LA Times. Harsh words like this didn't stop Canseco's tell-all tome from opening at number three on USA Today's bestsellers list and impacting Major League Baseball's policy on steroids. Three years later, Canseco is at it again with a second book, Vindicated: Big Names, Big Liars, and the Battle to Save Baseball. Today, you can catch the author/reality TV show star/aspiring screenwriter signing copies of his new book at Costco in Van Nuys starting at 6pm. Yesterday, Jose took time out from the usual crashing press conferences, ratting out former teammates and fellow players and chasing his Hollywood dream to speak with LAist over the phone from his Los Angeles home.

What do you enjoy most about living here in Los Angeles?
Well I get to see my daughter. That's the most important thing. My ex-wife brought my daughter over four or five years ago and I followed.

How much of living out here has to do with your pursuit of a career in show business?
Probably all of it. I've been busy writing these two books. I've done some reality TV in between. Obviously, now that the second book has been incredibly well received, I've been meeting with producers to get the movie deal done. 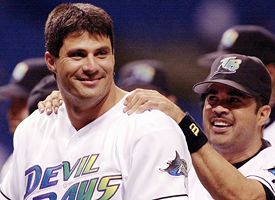 Do you believe that baseball is a much cleaner sport right now? If so, how much of that do you take credit for?
Well I don't think that anything would have happened in the game if I would not have written my first book Juiced. If Congress would not have gotten involved, I think the game would have stayed the same. I think probably 100 percent of the players would be using steroids right now. Hopefully with everything that has happened, steroids are out of the game completely.

What about HGH? Is that still apart of the game?
I hope not. Even though it's something that is not detectable, I think players are getting the hint. The problem with HGH even though it's not detectable you still run the risk of getting caught because you got there's always going to be that supplier who can talk against you.

How much did money play a part in the fact that nobody was talking about steroids in the game?
A lot really. Players weren't going to talk because they didn't want to lose their job. I was blackballed in the game before I even wrote my book. Players were making incredible amounts of money and none of them wanted to come on my side and agree with me. Everyone was afraid of Major League Baseball and none of these guys wanted to have their earnings taken away from them.

What do you believe is the price you had to pay for writing your book? How many friendships do you think you lost because of it?
Before I wrote my first book, I had already been blackballed from the game. I lost all my friends in baseball. Nobody would talk to me. Nobody would deal with me. It was basically a no-brainer. It stayed the same, status quo when the first book was written. It stayed the same when my second book was written. When I was blackballed, I was already done for in the sense of getting back to the major league level or having any sort of relationship or dealings with the players. So it didn't matter at that point.

In your first book, you got the word at that guys were cheating at the game of baseball, but you also wrote quite a bit about guys cheating on their wives. How rampant would you say that cheating is? Did you ever see guys cheating with underage girls?
Never with underage girls. I never saw that. Most of the guys back then were cheating on their wives. I think there was like maybe one or two that were not. I think back then it was a common place. Back then it was a competition, athletes are competitive people, it was a competition to see who could get the most girls - and it was very easy. As a Major League Baseball player it was very easy to get these girls.

Back to the underage girls. I bring that up because of the news that came out this week regarding Roger Clemens. What's your take on this story?
You know I just heard about that yesterday. I don't really know what to say. I don't know if it's true or not. You know, I guess we're going to have to wait to hear from Roger and hear what he has to say. In my time with Roger I never saw him hanging around with other girls, you know.

What were you looking to accomplish with Vindicated?
Well it was the aftermath of the first book. It was basically to let people know what was right or wrong about the Mitchell Report. The second book has polygraph transcripts that show that the players mentioned in both the first and second book were completely 100% accurate. I've passed all these polygraphs. Obviously to mention other players that I really hadn't mentioned because I found some things out after the first book had been written. Guys that I have really come to dislike, whether it be from things that they had done with my ex-wife Jessica or done through the media, like Alex Rodriguez. Basically I was just looking to cover the facts of baseball.

Speaking of the Mitchell Report, you showed up during the press conference. What were you hoping to accomplish there?
Actually I had meetings with book publishers that were kind of in the same building. I happened to pass by there and people saw me there and of course they are going to make a big stink about it. What I found incredible though was that Mitchell or Major League Baseball didn't want me anywhere near that room. I just find that incredible. You know, I tried to help them I tried to share some of the things I knew and they never asked me for any information.

How do you think MLB has reacted to the Mitchell Report?
Ironically or not Major League Baseball paid for the Mitchell Report. They knew what they were paying for. After I wrote my second book, when I was doing a book signing a couple people who work for Mitchell approached me about joining forces and sharing some of the information I have. I find it strange, that two books later they came around. Before the report came out they didn't want me anywhere near this investigation. They never called me, never asked me for my opinion or my side of thing in regards to any of the players or events that I was named in. I found that extremely strange. I guess to them their viewpoint was 'You know what, we can't fight Jose any longer. He speaks the truth. It's time to just say uncle and give in.'

Are you working with these investigators?
I'll probably try to meet with them sometime soon. We'll find out what's really going on.

What are your thoughts on the reception book has received so far?
The reception of the book has been great. I think it's made four of five bestsellers lists. I've ran into people who have given me a high-five saying 'thanks for writing the book' and 'I'm glad you got the truth out there.'

I haven't read the book yet. Give me your sales pitch on why I should.
One word, the truth. When you're not biased, when you have no relationships to maintain, when you have no future earnings to look out for you can honestly say the unbiased truth. Point blank. When you read it you know that every word, word-for-word really did happen.

Has Alex Rodriguez contacted you at all?
No he has not.

Nobody who works for him either?
No.

How do you interpret that lack of contact?
Not even the lack of contact, what about the lack of an explanation to the media? He's only said "no comment." To me that's an admittance of guilt. I mean if I am lying or saying something untruthful, he's going to challenge me in the public eye. He's going to take a polygraph. But he's not doing that. No player I have mentioned in both of my books will step up and take a polygraph.

What about Magglio Ordonez, any word from him?
None whatsoever. No.

Is it true that he was only included in this book because he wouldn't give you money?
Absolutely not. That's something we know obviously to be a lie because Magglio and I never spoke. I never spoke to Magglio. In the article they said Magglio never spoke to me. Scott Boras never spoke to me. If I was trying to extort money from Magglio why wouldn't he just contact me. He said he contacted the FBI, he contacted Major League Baseball. Why not contact me and just record the conversation? It would have been very simple. But that didn't happen. It's an absolute lie.

Have you read Pat Jordan's piece about you that was posted on Deadspin?
I saw that. My attorney Robert Saunooke was involved with that piece. He has since been fired for that and other issues I had with him. My new attorney, Greg Emerson and I are piecing together a lawsuit against these individuals.

Both Rob and Pat?
Yes.

So, none of what was in that piece is true?
There were a lot of exaggerations. A lot of it was attorney/client privileged information in there that was very private information to me that should not have gotten out. A lot of what was in there was Robert's opinion. There were some facts that were involved that were very private details that I am not going to get into now that broke the attorney/client privilege.

If you could sum up your baseball career in one word what would it be?
Strange. Unusually strange.

Knowing what you know now. If you had to do it all over and everything was the same, no rules against steroids as it was during your career, would you have taken steroids again?
I think there is a lot to understand. The reason I took steroids was I made a promise to my mother who was dying that I was going to be the best player in the world. Briefly after that I was introduced to steroids. I think like I said before, I had the best intentions but I didn't take the best route. Back then there were no rules against steroids, they weren't illegal and nearly every player in Major League Baseball was taking steroids.

When the ball hit you on the head and went over the wall for home run, where would you rank that in your career low-lights?
Actually I thought that was kind of funny when it happened. Nobody could have done that the way I did it. That could have only happened to me.

Last question, what's next for you?
Next thing would be some more reality TV, a reality TV show involving martial arts. I am working with producers to get my movie made, the story of my life. And I am working on a third book which will be fiction.

Fiction, really?
Yeah it's going to be about baseball and cloning. It's a very dark dark sci-fi story.