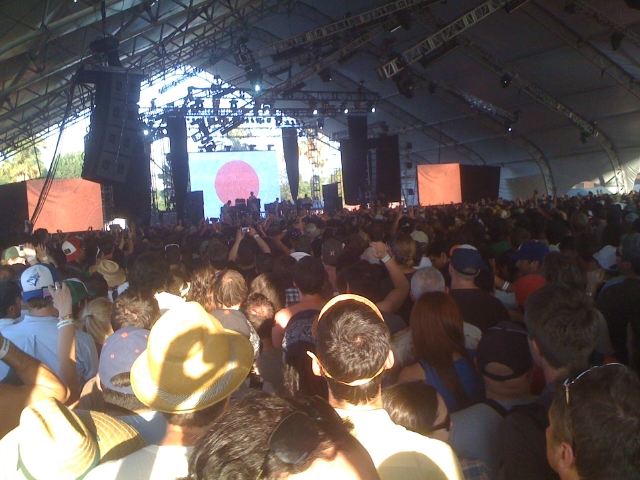 Love ‘em or hate ‘em, music festivals are the dim sum of the concert-going experience; try a little of everything and go back for more of what you like (or ditch out on what you don’t). This year’s Coachella was no exception, with acts like country crooner Dwight Yoakam vying for time against dance-rock lovelies Hot Chip, or Prince breaking down the funk for the masses after a particularly breathtaking Portishead set. With the desert heat not as heart-stopping as previous years and the lineup eclectic as it was educational, Coachella brought out all ages and backgrounds of super fans and the uninitiated alike. People-watching was good but people-listening was at an all time high, so I took advantage of all the close quarters on Saturday to do a little eavesdropping.

During Prince:
Girl: “HOLY SHIT IT’S MARVIN GAYE AND THE TIME!”
Guy: “Yeah, I think you mean Morris Day and the Time. I’m pretty sure Marvin Gaye is dead. Shot. By his dad.”
Girl: “Way to take it dark, man.”

During Boyz Noize:
Girl: Recoiling in horror as a sweaty, shirtless guy tries to pass by too closely.
Guy behind her wearing a "YOUR RETARDED" shirt: “Dude, they make t-shirts for a reason.” 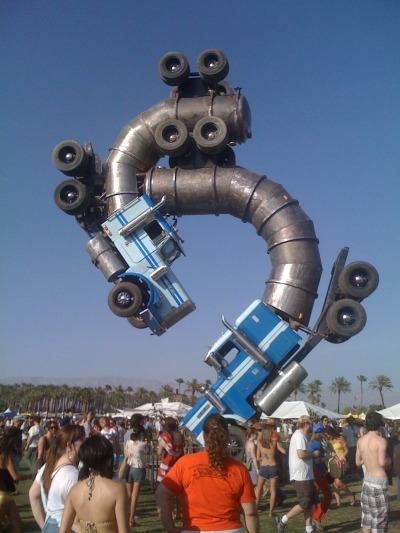 Walking between Cold War Kids and DeVotchKa:
Guy to no one in particular: “Do you think these girls know how orange they really are?”

Pre M.I.A:
Girl: Looking anxiously around at the crowd and the giant speaker hanging overhead.
Guy standing behind her, smoking a sticky jay and a menthol simultaneously: “Hey, is the smoke bothering you?”
Girl: “No, I’m just kind of claustrophobic.”
Guy: “Ok, I’ll just blow it upwards then.”

On the grass during Kraftwerk:
Girl to group: “At least it’s not like last year. Nothing says “ignore me” like the entire A Team of the Victoria’s Secret roster drunk on vodka setting up camp three feet from you.”