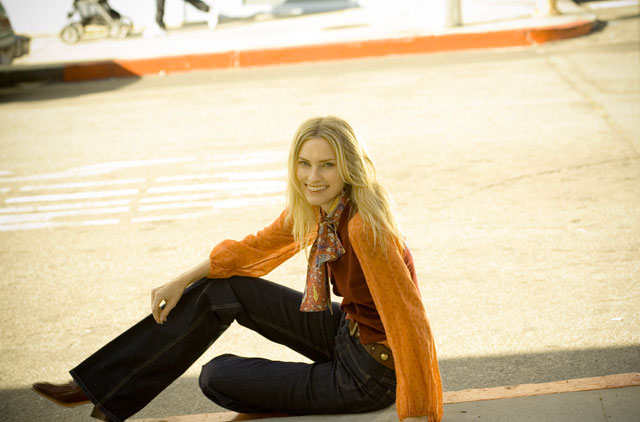 On June 3, Aimee Mann’s new album, @#%&*! Smilers, will be released on her SuperEgo Records label. Throughout the 13 tracks, Mann delivers a musical experience that packs an emotional punch. The songs hint at her playful side and deliver melodies you’ll want to hum for the rest of the day.

From her early music with ‘Til Tuesday (“Voices Carry”) to her Oscar-nominated work on the Magnolia soundtrack, to her recent albums (Lost in Space and The Forgotten Arm), Mann continues to change things up and deliver hauntingly beautiful music. LAist caught up with Mann to get the scoop on her new record.

LAist: What is the story behind the name of your album?

There are a few things that inspired it, but one of them is the fact that a friend of mine and I used to belong to this newsgroup called alt.bitter, and the album is named after one of the posts that appeared in the group. In that thread, a bunch of us vented about those annoying people who tell you to smile when you don’t feel like it. There’s almost something a little sexist about it, too, because it’s usually men telling women to smile. It has this kind of inherent, annoying assumption that you’re there just so they can be pleased looking at you, and you’re somehow not doing your job if you’re not smiling.

Have you looked to see if alt.bitter is still in existence? You’ve been giving them a lot of publicity lately…

(laughs) I haven’t checked that out. Most of that kind of stuff is set up differently nowadays, but I’ll have to do a search and see.

You started your songwriting career writing on the bass, then you switched to acoustic guitar. Your current album is very keyboard-driven. Which instrument did you use to write the songs on Smilers?

I wrote most of it on guitar, but I’ve been trying to write more on piano and keyboard to mix things up a bit.

What was it about the age 31 that inspired you to muse on it on the new record in the song “31 Today”? Was it a significant year for you, or was it an arbitrary age for an unsettled character?

It’s not an arbitrary age. I sort of felt like that was an age when people really start to take a really hard look at themselves and their lives, and take an honest look at where they are. I mean, turning 30 or 40 or any of the big numbers—you always think that’s going to be the hard part. But I think it really comes a year later when you start to think, “Oh, right, I’m not going to turn around and go back the other way.”

With your recent comedy sketches promoting your Christmas shows, the Comedy Central appearance, the video with Morgan Murphy and the sonically lighter tones heard on your new record—was there a deliberate effort on your part to lighten up the tone of your work since The Forgotten Arm and Lost in Space?

Yeah, definitely. I think I was in a lighter mood and the album reflects it. I think the songs and the production are sort of lighter. And partly, in calling it Smilers, I feel that it almost unironically refers to the music, because I do feel like it’s kind of a brighter record.

When you write a song like “Phoenix,” do you usually start with the lyrics or the melody?

I start with a chord progression and then a melody almost immediately follows. Then the meter of the melody suggests a sentence or a line, and that leads to a story, and I kind of go from there.

How much time/concern do you put into configuring the order of tracks on an album?

I think about it a lot. I definitely try out different sequences. Even though a lot of people are into downloading one song at a time, I think that if you want to sit down with an album, it should have a flow and go from one mood to another in a way that takes you somewhere.

You’ve worked with some amazing producers in the past—such as Jon Brion and Joe Henry—and I was wondering how the collaboration with [Smilers producer] Paul Bryan came about.

Paul plays bass in my band, and we have played together for a decade. So we got to know each other really well over the years, and I always felt like he was such a principled person—especially when it comes to music. He’s someone who is incapable of just going through the motions. He has to be really emotionally connected, and as a result he’s this super-talented musician with all these amazing ideas. 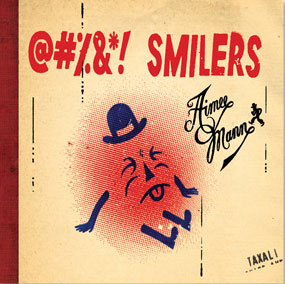 Can you reveal anything about the graphic novel you’re working on?

I haven’t really started working on it. Right now I’m just practicing drawing and cartooning, and I’ve gotten some great help from cartoonist Joe Matt, who lives right down the street from me. At this point, what I do is I take friends’ conversations and try to draw them so I can get into the practice of animating dialogue.

I heard that you’re working on The Forgotten Arm as a musical. Will it be something along the lines of Movin’ Out or something more old-school?

I’ve decided to tackle the graphic novel first, so I’m not working on the musical yet. I’m looking forward to it, though—it’s a tough process because writing for musicals is so different. For instance, take one of my favorite musicals, Guys and Dolls…a song like, “Sit Down, You’re Rockin’ the Boat,” has to sound great plus progress the story.

The first date of your summer tour is taking place at the new Largo (Largo at the Coronet). Have you seen the new venue yet?

I haven’t, but Paul Bryan and others have seen it and they’ve all told me it’s fantastic.

Largo has sort of been your “home venue” for many years. What makes it so special?

Really! In my years of going to Largo, I don’t think I’ve ever seen him perform on stage.

He used to. He would perform occasionally during Jon Brion’s shows—his band was called the Virgil Hilts and they had some really nice songs. I loved watching Flanny play.

What are some of your favorite places to hang out in Los Angeles?

Last night we went to The Hungry Cat, which was unbelievably amazing—the oysters were mind-blowing. I love Largo, obviously, and places like Victor’s, Griffith Park and the Upright Citizen’s Brigade. Then there’s the boxing gym I go to, the Wild Card.

My husband [fellow singer-songwriter Michael Penn] and I also just got a membership to the Magic Castle. Michael was really into magic as a kid and we just love that place. Actually, we’ve been getting to know quite a few magicians lately and I think I may even have one open for me during one or two of my Largo shows in June.

Actually, I’m more disturbed by the two “e”s in my name. I’m always leery when too many vowels congregate in one place.

What effect has Huey Lewis and the News had on you?

Actually, I’ve always really liked their song, “If This Is It.” It has a great melody.

Apparently there’s a book that was published in 1998 called Circuit of Heaven, in which 99 percent of the world lives in virtual reality and sings Aimee Mann songs. I just have to ask, have you started your world domination via Second Life?

I tried it out, but as soon as I made an avatar, I was bored. I lost interest. But my husband has totally nerded out on Second Life and is totally into it. He’s built a lodge and he wears an ascot…it’s awesome.

Thanks for taking the time to speak with with LAist, Aimee.

@#%&*! Smilers is available for pre-order via MusicToday and other major music retailers. In addition, Mann will be performing at Largo at the Coronet on June 2 and 10, as well as the House of Blues in Anaheim on June 6. To hear a preview of some of the @#%&*! Smilers tracks, visit Aimee Mann’s official website or her myspace page.

For those of you who haven't seen it, here is Aimee Mann's (hilarious) Christmas trilogy:

Special thanks to Duane Dolieslager and Brandon Schott for their question submissions.