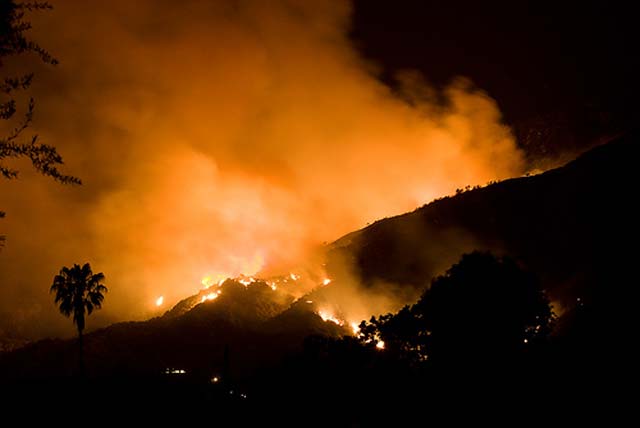 Photo by KeithJ via the LAist Featured Photos pool on Flickr

Hot temperatures, low humidity, and brisk winds helped to whip up the flames yesterday in the foothills of Sierra Madre, as a fire that broke out mid-afternoon Saturday has now blazed through approximately 400 acres.

The fire was first reported shortly before 2 p.m. close to Santa Anita Canyon Road, and caused some initial evacuations from the nearby recreation areas, including a Boy Scout camp and many hikers who were eventually escorted out of the forest by sheriff's deputies.

But by nightfall the fire raged on, forcing the evacuation of homes in the area, sending around 1,000 residents packing. The fire moved north and west and during daylight there were constant water drops via helicopters, which resumed with the sunrise this morning. Firefighters are facing tough terrain and limited access to the area, but so far no one has been injured, reports the Pasadena Star-News. Because it is early in the season, the brush still has a fair amount of moisture in it, which means the fire will be less aggressive and can be contained more easily.

Evacuation and shelter information, + video below.

Evacuation orders are in effect for the following areas:

All homes above Carter Avenue between Oak Crest Drive and Mountain Trail Avenue.

All homes above Grandview Avenue between Mountain Trail and Santa Anita avenues.

Evacuation shelters have been set up at: