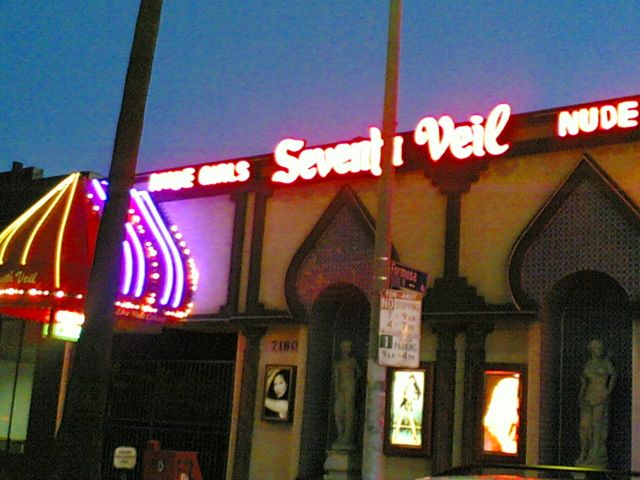 I think it was the old posters outside the Seventh Veil on Sunset that first caught my eye. The women in them were straight out of Porky’s Revenge: the hair was teased, the thongs were high, and the photos' glossy veneers were remarkably reminiscent of Glamour Shots.

The club had seemingly remained firmly, unapologetically and possibly even aggressively in the 80’s. It was that, along with the neon replica of some sort of Arabian palace that marks the entrance, that piqued my curiosity enough one Friday evening to throw caution to the wind and venture in to see what my neighborhood strip joint was really all about.

I began by negotiating the cover down from $20 down to $10. I mean, let’s be real – it was 9:30 on a Friday night, and the place was hardly bumping, from what I could tell standing outside.

Two steps in the door, I turned to the left and was abruptly hit with billows of smoke being generated from a machine. I waved my hand around in front of my face like a melodramatic nonsmoker and could just make out through the haze that the main room was small, with two long oval stages in the middle and the requisite red velvet couches lining the walls.

"Gentlemen," the DJ boomed overhead. "Get your wallets out! These girls aren't going to take anything off for free!"

Even through the smoke I could see that there were patrons sitting by the stage.

"That's so shitty," I said to my friend. "They're sitting on the tip rail! They shouldn't have to be told to tip!"

We negotiated our way through to the stage where the girls were dancing, the goal of getting to where we needed to be momentarily tempering my righteous indignation at the fact that these girls were getting the shaft.

The young woman onstage was about halfway through her two-song set, rendering her topless but still clothed from waist to thigh. She wandered around the stage, occasionally tossing her long black hair around a bit, but otherwise fairly aimless and definitely sulky, and was egged on in her disgruntled-ness by the DJ.

"They must be giving her absolutely no money," I remarked, getting more and more annoyed on her behalf by the cheap bastards watching her strip but not dropping any cash for the privilege.

As we got closer to the stage, ready with our stack of ones to right the wrong, we realized that there were no seats available around the tip rail. Disheartened, we found a temporary spot along the wall and waited for the server.

"I wonder why they don't open the other stage up," I said while we looked around.

Moments later, as she was taking our drink order, the waitress explained to me that if they were to open up the second stage, it would distract from the first.

"But there isn't even anywhere to sit at that stage," I said. "If you open up the other one more people will tip."

She stared at me blankly. "Did you want just a diet coke, or anything else?" she replied.

"Just a diet coke," I mumbled, reminding myself that no one really wants to hear my solution for a problem that is a) not theirs, and b) impossible for them to take action on.

Not five minutes later, though, we saw some spots open up at the stage. We picked up our nonalcoholic bevs and beelined for the seats.

As soon as we sat down, I noticed that there was actually some money on the stage - not a lot, but enough that I wondered why the DJ had been delivering a continual smackdown in excess of what I had heard other strip club DJ's do.

But I'm all for big tips, so I was still supportive nevertheless of his efforts to plumb the depths of the patrons' wallets for the girls.

We sat through about five girls, and it was then that I realized that I have been spoiled by the Crazy Girls, the Jumbo's, and the Cheetah's of the world where the women actually dance. These ladies could not have been more miserable. All I can assume is that it is a disastrous place to work, because girl after girl took the stage looking bored out of her mind. I can appreciate that sometimes stripping sucks, but I was a little surprised to see each and every one of them looking like they'd rather be watching traffic merge on the 405 in rush hour.

And, I maintain that the no alcohol in nudie bars law is the stupidest, most insulting idea to ever gain support in cities across the country. Something about watching women disrobe completely and drinking straight diet coke just feels all wrong. Maybe if I was a dude it wouldn't be like that, and I'd just be happy to see some beav, but I'd like to think not.

The DJ, by this point, was just creating an atmosphere that fostered hostile client/dancer relationships. Even as people tipped, he would stop the music and yell, "These girls aren't up there for nothing! Get those wallets out!"

I think it was when a woman took to the stage and kept her sunglasses on the entire time, wobbling around like she might tip right over at any moment, that we decided it was time to leave.

As I tried to make a discreet and graceful exit, I realized too late that the stage and the wall behind it were not set up for a such a thing.

"Excuse me," I said quietly but with urgency to the men who stared at Sunglasses while she teetered onstage. It's an awkward time to fall in someone's lap, because God knows what you'll encounter there, but I did, accidentally, on more than one occasion, and I have to say that I truly wished that either I hadn't, or that I had at least gotten paid for it.

I likely won't go back to the Seventh Veil, but I'm happy to at least know now what's behind that intriguing exterior.