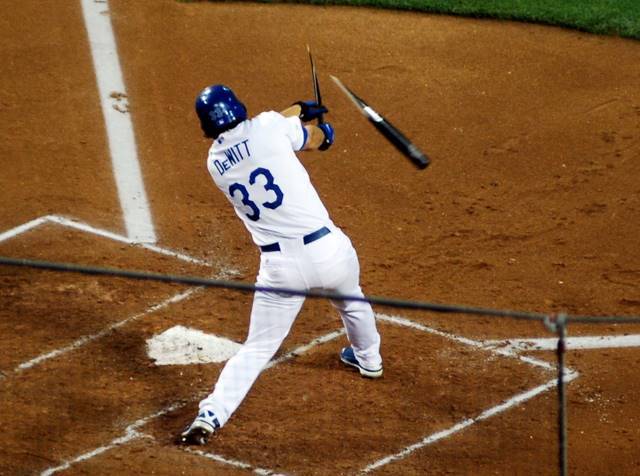 Tonight's Dodger game was amazing in so many ways. The emotions ran high, ranging from the elation of witnessing Matt Kemp's grand slam to top off a 10 run first inning, the fear and helplessness of watching umpire Kerwin Danley get hit in the head by one of Penny's pitches, and then the absolute anger and frustration that I personally experienced sitting in front of the most annoying fucktard ever.

Sometime around the 5th inning, I started to get pelted with popcorn by this fucker. It was sticking to my hair and falling down my back. So naturally, I turned around and told him to stop. This shouldn't be difficult for a grown man to understand. However his little friend (next photo) said "but he's throwing it and I'm eating it.... so stop looking at me!"

"Okay, then stop throwing popcorn and I won't have to turn around."

"You're not going to eat it out of my shorts, and that's where it's landing."

At this point the fucktard offers some very helpful advice: "Shut up and watch the game, lady!"

I am completely bewildered by his kindness and consideration. "Okay then stop throwing your fucking popcorn at me."

He responds with some medical wisdom: "You need to chill out...go smoke a bowl!"

At this point even my parents are irritated, and his attempts at making friends are clearly wearing thin. "OKAY, I WILL CHILL OUT WHEN YOU STOP THROWING YOUR POPCORN AT ME!"

Since he'd just used his clever marijuana line on me and had run out of retorts, he starts shouting (again), "Just turn around and watch the game!"

At this point I just turned around and glared, figuring he'd get worked up enough that he'd leave to go smoke a bowl and then next thing I know, dirty feet girl (photo 3) is whining again.

"STOP LOOKING AT MEEEEEEE!" The poor girl was near tears as the only functioning neuron she has left was overloaded with yelling, beer and popcorn throwing. "I don't like how you're looking at meeeee!"

At this point even my mom is pissed off, as they all start mocking us with their popcorn throwing. The interesting part is that they weren't even throwing the popcorn at me on purpose, but got angry when I pointed out that it was hitting me. And the best part is, of course, that the jerk who yelled at me and called me names asked me to take his picture. Clearly he didn't know what the fate of that digital file would be.

So now I will sit here at the computer and eagerly await all comments like "it was a Saturday night and people are drunk, you're a sexless prude who doesn't know how to have fun" or "having popcorn in your hair is part of being at a baseball game, have you even been to Dodger Stadium before?" And then I will laugh, because if people like you didn't exist I'd have no one to write about.

all photos by malingering