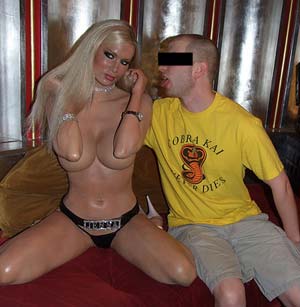 Move over, Michael Jackson. An Orange County man has redefined the meaning of "crotch grabber."

Determined to get his piece of Jenna, video surveillance from the retailer shows the man repeatedly tossing a rock at the glass door, then finally finding success shattering the display window with his adapted weapon and heading inside.

According to the OC Register, the thief encountered a similar frustration when he's faced with an unyielding till: "Video shows him try to break into the store's cash register, but it wouldn't open for him" but, perhaps remembering that if you take things just a little to the left or right you can hit the jackpot, "he looks around, and makes his selection – a Jenna Jameson body double made of Ultra Realistic skin – and walks out of the store." SCORE!