Loteria! Grill at 3rd and Fairfax 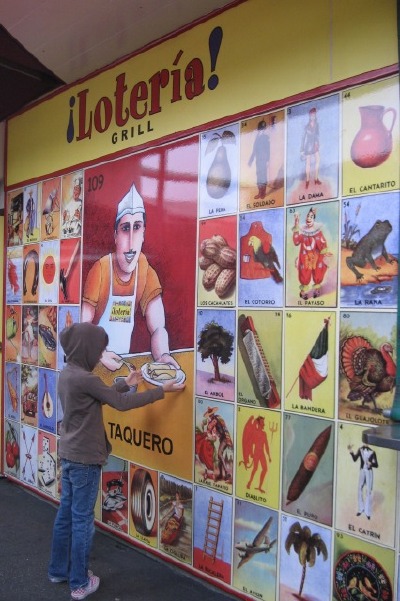 Even though the Farmers Market at 3rd and Fairfax isn’t really a farmers market at all, Loteria! Grill alone stands out among the labyrinth of tchotchke-filled stores and food stands that make up this misnomer (and trend setter?) as a viable reason to brave the parking lot at the Grove. Named after Mexico’s answer to Bingo, Loteria!’s Zagat-rated and highly lauded open-air stand seems to belie its moniker; consistently excellent food here seems anything but a game of chance.

The premise is pretty basic – you can order a taco, burrito, tostada or sope in one of a handful of preparations – but don’t think that means your typical refried beans-and-lard bloat-fest reigning supreme at the average margarita joint. Leaning towards traditional Mexican, the end result is a lighter, more flavorful fare.

Once you get past the fact that the little gals taking your order can holler your name louder than a circus barker, stand a few feet away from the melee and check the ever-changing specials menu. If you've got your game plan, have one person in your crew grab a table (they're often in short supply, especially as the weather heats up) and hop into the quick-moving line. If you're still uncertain, start with an order of the Sopa de Tortilla or Pozole (yet another reason to love pork and hominy), both spicy and filling and the No. 1 cure for what ails ya, be it the ass-kicking flu that sidelined half of the city earlier this year or too many Vodka Gimlets the night before. For something with a bit more substance, the Mole Poblano con Pollo with its tender, slow marinated shredded chicken, sesame seeds, onion and queso fresco is satisfying as a couple of soft corn tacos, especially with a dollop of their chunky guacamole and some extra mole for drizzling.

For the non-meat eaters, the Calabacitas burrito, filled with zucchini and roasted corn succotash, salsa verde, onion, cilantro and queso fresco is a sizeable meal in itself, but add a side of whole black beans and rice and an order of fresh chips with salsa and you've got enough to share with a friend. For those craving a more LA version of Mexican food, you've still got your Taquitos (chicken, shredded beef or potato), quesadillas and enchiladas (try the chicken and cheese Suizas, with roasted tomatillo sauce, or the Rojas in a red chile Guajillo sauce), so you're not on totally unfamiliar ground.

Finish with an order of Platano Frito (fried plantains with crèma mexicana) and wash it all down with a cold cerveza from the neighboring E.B.'S Beer and Wine. Loteria! Grill proves to be a sure thing for the mid-city. (Just don't forget to validate that parking!)