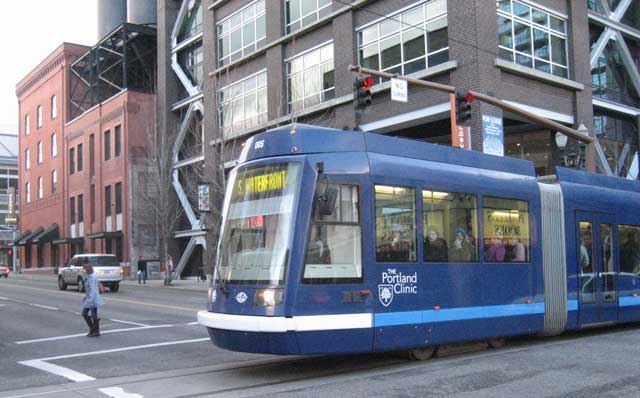 A streetcar in Portland, OR | Photo by Zach Behrens/LAist

As mentioned yesterday, Eric Richardson of blogdowntown is visiting Portland on a Los Angeles delegation to study the Pacific Northwest city's public transit system, namely the streetcar system. One of the biggest concerns is construction — the time it takes and how it affects traffic, both auto and pedestrian. One of the biggest opponents was Mike Powell, of Powell's Books fame. But after the construction came and went, he became a fan:

The timeline for streetcar construction? One block per week, with only the lane under construction taken out of service. Both the street and sidewalk remained open.

After becoming convinced himself, Powell became a salesman for the line. When he would encounter a property owner who brought up the disruption question, Powell would tell them one thing. "Go to the beach for one week, and when you come back your property will be worth 50% more." Yesterday he told the L.A. group that his statement wasn't correct. "I was wrong about the 50%. It ended up being 300%."

Previously, LAist had an idea of putting a streetcar system in the NoHo Arts District. Some dug it, some didn't. A posting on Richardson's Twitter yesterday said this: "One thing that keeps coming up is the value of the streetcar as a development driver. Planning a route for potential, not present." In regards to NoHo, the potential is there, growing and getting better everyday, but it's definitely not where it needs to be at present.